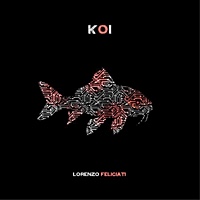 For his sixth recording for RareNoiseRecords, following his 2011 solo album Frequent Flyer and subsequent collaborations with vocalist-multi-instrumentalist Lorenzo Esposito Fornasari (Berserk!) and Porcupine Tree bassist Colin Edwin (Twinscapes) as well as two albums with the adventurous jazz-rock outfit Naked Truth (Shizaru, Ouroboros), the restlessly creative bassist-composer-producer Lorenzo Feliciati has realized his most ambitious and personal project to date in Koi.

Traditional Chinese folktales tell the story of Koi fish that swam up the Yellow River, and though taunted by demons, would not relent in their quest to jump over waterfalls; the gods noticed and celebrated their perseverance and endurance by transforming them into golden dragons, a symbol of strength and power. The Japanese recognized these fish not just for their beauty but for their ability to induce otherworldly states of perception in the observer. These altered states of perception ultimately lead to the attraction of high energy, which manifests itself in the form of prosperity of all kinds in our lives.

The musical journey of Koi begins with the spacious, echo-laden piano soundscape “Kohaku” and is followed by the hard-hitting “New House,” a Feliciati composition with Steve Jansen on drums and Alessandro Gwis on keyboards, that is brimming with kinetic momentum and based on a repetitive riff augmented by punchy horns. Lorenzo’s fretless bass melody is doubled here by muted trumpet while baritone sax deepens the groove. The icy and hypnotic interlude “Kumonryu” is followed by the moody, slow-grooving requiem “Oxbow.”

Following another ambient interlude, “Black Kumonryu” Feliciati is reunited with his Naked Truth band mate Mastelotto, who provides the rhythmic pulse on “Noir Alley Verdigris”, a potent number which falls somewhere between King Crimson and Weather Report. “Ogon” provides a breath before Feliciati and crew launch into the dynamic, odd-metered “Narada”, featuring a strong 7/8 groove by Jansen, nearly a dance beat, where distorted bass and horn section mesh to unison.

Feliciati turns in his most expressive fretless playing on “Margata”, a homage to Jaco Pastorius; following another mesmerizing interlude in “Kuchibeni,” Feliciati unleashes his fuzz bass chops on the powerhouse “Fish Bowl”, which incorporates trombones and bass in a low-end unison motif before yielding to a throbbing vamp. This piece originally started as a Frank Zappa-influenced bass/horn section unison riff, but morphed during the final arrangement into something quite different altogether – Feliciati’s bass line moving around Steve Jansen’s drums and electronics giving the impression that it is Jansen moving around Feliciati.

The collection closes with the title track “Koi”, which travels from minimalist intro to cinematic crescendo – the Koi has now become a Golden Dragon.