There are a lot of gold standards on tenor. I was trying to find a way to move past those influences. Playing the baritone felt really natural to me. I felt like I could do something personal and interesting with it. 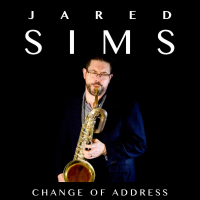 slideshow
After two decades in New England, where multi-reed virtuoso Jared Sims made his mark as an instrumentalist, bandleader, educator, and all-around musical provocateur, Sims celebrates his return to West Virginia with Change of Address, his fifth album as a leader. On the new CD, which will be released April 14 by Ropeadope Records, Sims sticks to his favorite instrument—the baritone sax—in the company of an airtight, organ-dappled quintet.

Change of Address commemorates Sims’s homecoming to his alma mater, West Virginia University in Morgantown, which has named him Director of its Jazz Studies Department 20 years after he earned his own jazz studies degree there.

The music on the album is notable for instilling the jazz-soul tradition with an up-to-the-minute sensibility and is deftly interpreted by the leader, joined by an intriguing collection of players for whom he wrote its tunes, Ellington-style. They include the wife-and-husband team of organist Nina Ott and bassist Chris Lopes (a longtime crony of guitarist Jeff Parker), and a pair of young Boston-area veterans in guitarist Steve Fell and drummer Jared Seabrook (older brother of guitar provocateur Brandon).

Among the highlights on Change of Address are “Ghost Guest 1979,” which showcases a full range of textural effects from Fell and seamless interaction between bass and Hammond B-3; the sprightly, wide-open “Lights and Colors”; and “Forest Hills,” inspired by the Boston neighborhood in which he lived.

Sims (b. 1974) started playing the baritone in the fifth grade in his hometown of Staunton, Virginia, but only became dedicated to this most colossal of saxophones after bringing a tenor to a class at the New England Conservatory (NEC) and having his instructor chide him he would never be great on it because he would be following in the footsteps of too many legends.

Far from taking offense, Sims took his teacher’s words to heart. “There are a lot of gold standards on tenor,” he says. “I was trying to find a way to move past those influences. Playing the baritone felt really natural to me. I felt like I could do something personal and interesting with it.” A compelling example of this is Sims’s “Seeds of Shihab,” a tribute to baritone great Sahib Shihab, which like the other tracks on Change of Address luxuriates in the brawny, bottom-rich sound of the instrument.

Sims attended his first jazz concert, by Michael Brecker, in tenth grade, and saw the World Saxophone Quartet perform the following year. His fascination with the saxophone went “over the top” after he spoke with members of the WSQ following the show.

At WVU, he had a strong saxophone teacher in David Hastings, who schooled him in traditional styles. At NEC, where he played clarinet in addition to baritone, alto, and tenor, he tried to catch up to all the kinds of music he hadn’t been exposed to, including Third Stream, under the wing of distinguished faculty members Gunther Schuller, George Russell, and Ran Blake.

Sims went on to study for his doctorate in classical music performance at Boston University, where his lecture recital was on the modern Italian composer Luciano Berio and his solo Sequenza pieces. He also did research work on Igor Stravinsky, Charles Ives, and American popular music.

While in Boston, where he earned a reputation as a “saxophone colossus,” Sims roomed for four years with standout baritone saxophonist Charlie Kohlhase, a cog in Either/Orchestra, who turned him onto Shihab. One of his mentors at NEC was Allan Chase, with whom he continues to play in a band, Blow-up!, dedicated to the music of bebop baritone legend Serge Chaloff (they recorded in March 2017). He also played in numerous Boston-based bands including the Afro-Latin group Mango Blue (in which he continues to perform); the organ funk outfit Akashic Record; Blueprint Project with guitarist Eric Hofbauer, and the jazz-rock quartet Miracle Orchestra. The list of artists he has collaborated is an eclectic one and ranges from the late Bob Brookmeyer, Han Bennink, Matt Wilson, Dave Liebman, and Anat Cohen to the Temptations, 10,000 Maniacs, and Oasis’s Noel Gallagher.

Sims made his recording debut as a leader with the trio effort Acoustic Shadows (2009). He followed it with another three-man outing Convergence (2011), the collective quartet album The New Stablemates (2012), and Layers (2016), on which he overdubs himself playing saxophones, clarinets, and flute on tunes by Ellington, Monk, and Mingus.

Jared Sims will celebrate the release of Change of Address at the following engagements: 4/14 James Street Gastropub, Pittsburgh; 4/27 The Bitter End, NYC; 4/28 Third Life Studio, Boston (with same personnel as the CD).