Bandleader Michael Treni Continues His Resurgence With "Boys Night Out," A Powerhouse Session Showcasing His 16-piece Orchestra With Jerry Bergonzi 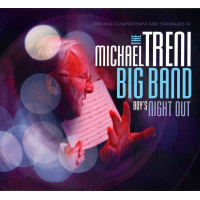 A boys’ night out is usually dedicated to the avid pursuit of instant gratification, but in the case of trombonist Michael Treni, this convivial music hang was a long time coming. His fourth release since rededicating himself to music after a successful career in business, Boys Night Out features Treni’s talent-laden 16-piece orchestra. It’s the work of a savvy leader who knows how to get the most out of his crew. While Boston tenor sax legend Jerry Bergonzi is the band’s best-known player, the cast features an array of veteran cats well-versed in turning a brief solo into a compelling, personal statement. The CD will be released on April 17, 2012.

“As beautifully as everyone plays no one is trying to show off and the chemistry is really great,” says Treni, who is quick to note that the gender specific title track doesn’t acknowledge the reality of today’s jazz scene. “The whole idea is guys going out and playing in the club for fun. When I wrote it 30 years ago, you didn’t have all the wonderful female musicians that you do now.”

A gifted player who attended the University of Miami, Treni established himself on the New York City scene in the late 1970s while keeping company with other rising young improvisers like Tom Harrell, John McNeil, Paul McCandless and Earl Gardner. After losing an opportunity to tour with Art Blakey, he turned his attention to writing and arranging. By the end of the 1980s he had transitioned into running his own audio technology company, and it was two decades before his focus returned to making music. His pleasure at being back in the fray is evident on every track of Boys Night Out.

The album opens with his intricate arrangement of Leonard Bernstein’s “Something’s Coming” from West Side Story. With its changing time signatures and polyrhythmic counterpoint the piece kicks off the proceeding in style, with incisive solos by Horace Silver alumnus Vinnie Cutro on trumpet and Bergonzi on soprano sax. Treni wrote the title track, “Boys Night Out,” for his first New York ensemble, Jazz Horizons Orchestra, circa 1978. An homage to Thad Jones, the piece features Sal Spicola's lithe soprano sax and some fiery trumpet work by Toshiko Akiyoshi Jazz Orchestra alumnus Chris Persad.

“My favorite writer is Oliver Nelson, but I also love Mingus and Thad Jones,” Treni says. “I like the colors that Gil Evans produced and I love Bob Brookmeyer’s writing. My guiding principal is to leave lots of space and not get in the soloist’s way.”

Coker contributes another Boys Night Out highlight with his arrangement of Billy Strayhorn’s “U.M.M.G.” It features brilliant solo work by inventive pianist Charles Blenzig, the rising young altoist Craig Yaremko, and Bergonzi, who demonstrates why he’s widely considered one of the most powerful tenor saxophonists of his generation. Treni closes the album with his lush arrangement of Jimmy Van Heusen’s standard “Here’s That Rainy Day,” an adventurous orchestration that surrounds his plush trombone with strings and woodwinds.

Coming of age in Portland, Maine in the 1960s, Treni studied with a succession of highly accomplished big band veterans, including Don Doane, a brilliant trombonist who toured with Woody Herman. “Doane was a jazz trombonist on par with Frank Rosolino and Carl Fontana,” Treni says. “He invited me down to his regular jam session when I was in the 9th grade and I went every Saturday. After four years I still couldn’t read, and didn’t know theory or chord structure, but I could play any tune at any tempo. I won a full scholarship to Berklee and studied with Phil Wilson, but it wasn’t until I got to Miami that I got serious about learning theory.”

At the University of Miami he displayed such prowess that the school recruited him for the faculty at age 19. Before long, Treni launched the band Kaleidoscope with classmate Pat Metheny. Following his graduation, and after a brief stint teaching at the Berklee College of Music in Boston, Treni moved to New York City. By the late 1970s he was a rising player in the New York jazz scene. But when Treni lost the opportunity to tour Europe with Art Blakey’s Jazz Messengers, his ambition took him in another direction. Recommended for the Messengers by his University of Miami buddy Bobby Watson, Treni impressed Blakey at an on-stage audition at a Village Vanguard.

“After the set Art came up and gave me a bear hug and said, ‘Damn man, you can play!’” Treni recalls. “I finished the week with him and everything seemed set for the European tour, but when I didn’t hear anything I called Bobby. It turned out that Curtis Fuller heard about the tour and asked if he could do it, so I didn’t get to go. That snapped something in me. If I wasn’t going to play with Blakey, I was going to pursue a career as a writer and commercial arranger.”

When he walked away from music in the late 1980s, it was to pursue an entrepreneurial vision as the founder of a company specializing in innovative wireless audio and language interpretation systems (he holds two patents in wireless technology). He returned to his first passion, jazz, about nine years ago. Working in partnership with his equally gifted producer Roy Nicolosi, who’s also an accomplished reed player, he has gradually assembled the Michael Treni Big Band, a jazz orchestra rife with heavyweight players.

Today, Treni is almost grateful for Curtis Fuller’s intervention. After a successful stint as an arranger and a career in business, he’s back making music on his own terms, enjoying all the camaraderie, creative frission and sheer swinging joy of a boys’ night out. The title might be dated, but the band’s sound is timeless.

“Back when I first arrived in New York, a boys’ night out meant making the rounds at jam sessions, rehearsal bands, and sitting in at jazz clubs, all in the hopes of establishing a reputation as an up-and-coming player. Today, Treni’s “Boys Night Out” is all about keeping the music alive for the next generation.”