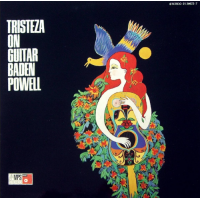 slideshow
In the States, guitarist Baden Powell remains one of the least known bossa nova pioneers of the late 1950s and 1960s. Rather than play the smoothed-out, laid-back samba popularized by João Gilberto, Luiz Bonfá, Carlos Lyra, Roberto Menescal, João Donato and Antonio Carlos Jobim, to name a few, he favored a more percussive attack that mixed Brazilian and African rhythms with a classical guitar approach. Powell also didn't travel much to New York, which by 1964 had become the commercial center of bossa nova recording thanks largely to Creed Taylor at Verve and CTI/A&M.

Perhaps Powell's best-known composition was Samba Saravah, which appeared on the 1966 soundtrack to the movie A Man and a Woman. Others include Samba Triste, Samba em Prelúdio, Berimbau and Tristeza. One of his finest albums was for the German MPS label—Tristeza on Guitar, recorded in 1966. The album has just been issued as a download by Edel AG, which acquired the MPS label in January 2014.

The album features Powell on guitar, agogo and surdo; Copinha on flute and agogo; Sergio on bass; Alfredo Bessa on atabaque and guica; Amauri Coelho on pandeiro and atabaque; and the great Milton Banana on drums. Powell's playing is masterful on every track. There is a pensive Manha De Carneval, a stunning Round About Midnight and a gorgeous classical piece called Invencao Em 7 1/2. My favorite, though, is Das Rosas (And Roses and Roses). To be honest, the only way to listen to Tristeza on Guitar (Sadness on Guitar) is from start to finish. It's much more rewarding when you treat it as a concept album.

Born in Rio de Janeiro in 1937, Powell was a guitar virtuoso at a young age. He purloined his aunt's guitar when he was 8 and was playing professionally by age 15. His grandfather was black and led the first all-black orchestra in Brazil. Powell's father played violin and was the leader of a Brazilian Boy Scouts troop. He idolized Robert Baden-Powell, founder of the British scouting movement, which is how Powell got his name. He gained visibility in Brazil once he teamed with Vinicius de Moraes, who wrote lyrics for most of Powell's compositions. A jazz devote, Powell favored Django Reinhardt and Barney Kessel.

The album is a powerful masterclass in the Brazilian guitar, with samba, jazz and classical elements. All these years later, it remains vital listening for anyone who appreciates melancholy and has an ear for joy.

Here's Samba Saravah from A Man and a Woman...