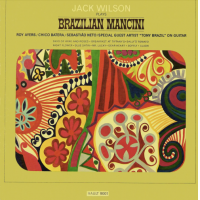 Jack Wilson was a jazz pianist with solid commercial instincts. His dashing looks and a fast arranging pen brought him to the attention of Buddy Collette, a West Coast multi-instrumentalist and studio musician. In the early 1960s, Buddy suggested that Wilson move out to Los Angeles, where studio orchestrating and recording work was plentiful. Wilson arrived and went directly to work, ghost arranging, recording under his own name and recording with major jazz musicians. By the mid-1980s, he relocated to New York where he performed at clubs with Barry Harris and in duos with bassists Boots Maleson and Peter Washington.