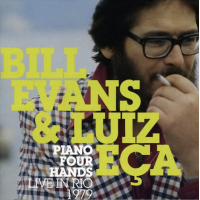 slideshow
Bill Evans recorded a studio duet album only once—The Ivory Hunters (1959), when he and Bob Brookmeyer both played pianos. He also recorded multiple piano overdubs for Conversations With Myself (1963) and Further Conversations With Myself (1967). And then there was From Left to Right, on which he played two different keyboards—the piano and the Fender Rhodes electric piano. The only time he was recorded live playing a duet was in 1979, during his South American tour that included the live Bill Evans albums I posted about earlier this week recorded in Buenos Aires, Argentina.

On September 29, 1979—two days after the Buenos Aires concert—the Bill Evans Trio was in Rio de Janeiro to perform at Sala Cecília Meireles. After the concert, Evans and bassist Marc Johnson were persuaded by locals to come along to a nightclub in the affluent Lagoa district called Chiko’s Bar, where the great Brazilian pianist Luiz Eça, a member of the Tamba Trio, played regularly.

Eça was there that night. Evans was asked to play, which he did with Johnson. But in the second set, when everyone was nice and loose, Evans shares the piano on several tracks, with Evans playing the upper register and Eça the lower, with Johnson on bass. Eça, of course, is the composer of The Dolphin, which Evans had recorded only once, on his From Left to Right album. [Album cover above shows Chiko's Bar in Rio]

An attorney at the club in the early hours of September 30 had the good sense to ask the club's DJ to record the music. When the impromptu gig ended, the attorney left the club with an hour-long reel. Thirty years later, in 2010, the bootleg tape was released by Jazz Lips, a British label, as Bill Evans & Luiz Eça: Piano Four Hands. Pay particular attention to Corcovado, as Evans and Eça huddle at the keyboard and then launch into an incredible version. It's the only time Evans was recorded playing the bossa nova standard. And dig the duet on Stella by Starlight. Whew!

Here's the entire bootleg that night free of ads. It's a remarkable document for the music and the warm and passionate atmosphere in which they played...