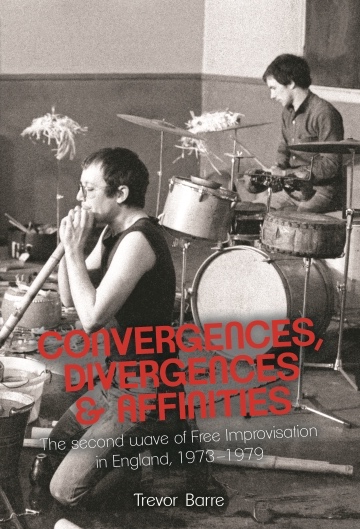 The sub title of the book is The Second Wave of Free Improvisation in England, 1973-9. It is the author’s second self-published book about English Free Improvisation, and follows his Beyond Jazz, The Golden Age of Free Music in London, 1966-72, an account of the genre's formative years. “Beyond Jazz” was well received and gained many favourable reviews in the press. In particular, it seemed that the book both shone a light on, and provided a much-needed account of, a music that had previously been next to ignored in the media. It was, in fact, the first such book of its kind, surprising given the lionization of most other genres from the '60s and '70s.

The author is a retired mental health nurse, having lived and practiced in London for 30 years. Wanting to use his increased spare time to do something useful, and having loved free improvisation for a similar amount of years, he identified a considerable gap in the market, and decided to translate his enthusiasm into the written word. The subject is a complex one which rewards both the historian and fan in Barre, and he has begun the research for another book, which will be a history of the London Musicians Collective. He lives in north London, is married and has three grown children.

If Beyond Jazz suggests a Golden Age, then Convergences can be said to cover a 7-year Silver Age, when free improv developed and changed, whilst remaining challenging and provocative, England's very own avant-garde, which paralleled and interacted with more popular strains like punk and post-punk. A fair amount of recorded evidence exists and is discussed in the book, and we are lucky that it is complemented by the contemporary magazine Musics, which is also studied in some detail as the house organ of the 'movement.' The emergence of a 'second generation' is studied, and the continuing work of the first, and the formation of several musical collectives/cooperatives across the country gets the attention is finally deserves. The figures of Steve Beresford, Lol Coxhill and Terry Day are identified as key mischief-making talents that represent the serious fun that the music provided, and get their own dedicated sections in the book.

It is intended that the book is written in a non-technical way, inviting newcomers to free improvisation to read about what can initially appear a very opaque scene, as well as wanting to appeal to those older fans who like a good story. It is written to attract, not to repel. It would appear that free improv is in a reasonably healthy state at present, and attracts a younger audience, as well as greybeards—the book is very much written with this audience in mind, who would like a readable, straightforward account of those years. It deserves to have its story old alongside the other creative environments that flourished in that decade. The author also has a website and a regularly-updated blog. One encouraging sign is the interest developed abroad, where the music is more generously funded and has a reasonably secure fan base.

Trevor Barre has been a fan of the music since the early 70s. Since retiring as a mental health practitioner, he has found the time to translate his enthusiasms into the written word. Many moons ago, he managed a record shop, which aided his burgeoning vinyl dependence. He has lived in London for 32 years, usually within striking distance of improvised music venues, and has three children.