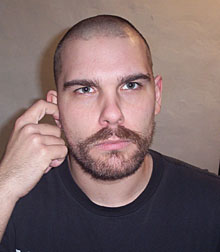 slideshow
AUM Fidelity is proud to announce the October 12th release of Betweenwhile (AUM065), the label debut of prolific New York drummer/composer/artist Mike Pride and his working quartet, From Bacteria To Boys. The group, which performs a distinctive amalgam of groove-based modern jazz, R&B, contemporary classical and chant works, features Darius Jones (alto saxophone), Alexis Marcelo (piano) and Peter Bitenc (bass). This release, the band's first with its current personnel, is named after part of a line from integral influence R. Kelly's 22-chapter epic, Trapped In The Closet (Jive Records).

“The title alludes to the many-layered accruement between human beings operating together and towards collective goals in time/space," explains vocalist/composer and freelance journalist Sam Mickens in the liner notes. “This is, of course, also essentially what the lineage of jazz music en masse is about and, appropriately, this newly minted quartet version of From Bacteria To Boys is the most explicitly 'jazz' music the prolific and creatively wayfaring Pride has yet produced. It is a music indeed ecstatically alive and committed to the continuance and elevation of love and happiness through all the means that jazz music can employ."

Based in New York for the past decade, Pride is renowned for his ability to excel in a wide range of genres and ensembles. Recognized as one of the 10 young jazz drummers to watch by the New York Times in 2009, he has worked with everyone from improvised music icon Anthony Braxton to punk legends Millions Of Dead Cops, toured extensively on four continents and appeared on more than 70 recordings. When not collaborating with creative music's most prominent figures, or leading/co-leading an eclectic list of groups from the worlds of blues, avant-rock and doom metal improv, he is an active educator, soundtrack composer and graphic artist.