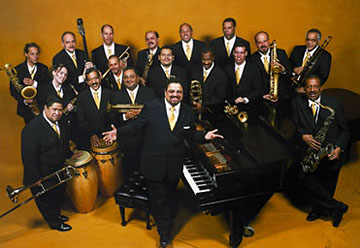 slideshow
Arturo O'Farrill and The Afro-Latin Jazz Orchestra are back at Symphony Space in New York City for two more big shows on March 27th and March 29th, 2008 @ 8:00 PM to present “Musica Nueva" and celebrate their new CD release “Song for Chico" on Zoho Records. Fresh off of the sold out performance in January, the ALJO explores the concept of groove (timba) as expressed throughout Latin America, including Peru, Colombia, Venezuela, Puerto Rico, Argentina and even the rare and exotic Borscht Belt in the Catskills. The program will feature premieres and new works from composers Fernando Otero, Michael Mossman, Emilio Solla, Arturo O'Farrill, Paul Shapiro, Michael Webster and others.

“This is the finest band I have ever performed with in my life. They make me feel as if I have returned to Cuba." -Bebo Valdez

ARTURO O'FARRILL (Music Director, Piano), winner of the Latin Jazz USA Outstanding Achievement Award for 2003, was born in Mexico and grew up in New York City. In 2002, Mr. O'Farrill and Wynton Marsalis created the Afro Latin Jazz Orchestra for Jazz at Lincoln Center due in part to a large and very demanding body of substantial music in the genre of Latin and Afro Cuban Jazz that deserves to be much more widely appreciated and experienced by the general jazz audience. His debut album with the Orchestra “Una Noche Inolvidable" earned a GRAMMY award nomination in 2006. Educated at the Manhattan School of Music, Brooklyn College Conservatory, and the Aaron Copland School of Music at Queens College, Mr. O'Farrill played piano with the Carla Bley Big Band from 1979 through 1983. He then went on to develop as a solo performer with a wide spectrum of artists including Dizzy Gillespie, Steve Turre, Freddy Cole, The Fort Apache Band, Lester Bowie, Wynton Marsalis, and Harry Belafonte.

In 1995 Mr. O'Farrill agreed to direct the band that preserved much of his father's music, Chico O'Farrill's Afro-Cuban Jazz Orchestra, which has been in residence at Birdland, New York City's famed nightclub, for the past nine years, as well as performing throughout the world as a solo artist and with his smaller groups. Besides recording five albums as a leader for Milestone Records, 32 Jazz, Zoho and M & I (Bloodlines, A Night in Tunisia, Cumana Bop, Live in Brooklyn and The Jim Seeley/Arturo O'Farrill Quintet), Mr. O'Farrill has appeared on numerous records including the Grammy-nominated Heart of a Legend, Carambola, and the soundtrack to the critically acclaimed movie Calle 54. Mr. O'Farrill was a special guest soloist at three landmark Jazz at Lincoln Center concerts- Afro-Cuban Jazz: Chico O'Farrill's Afro-Cuban Jazz Orchestra, November 1995; Con Alma: The Latin Tinge in Big Band Jazz, September 1998; and the 2001 Jazz at Lincoln Center Gala: The Spirit of Tito Puente, November 2001. In the spring and fall of 2002, he was also the featured artist in Jazz at Lincoln Center's Jazz in the Schools Tour, when he led a Latin jazz quintet for more than 50 educational performances that reached over 10,000 students in NYC metropolitan area schools. As an educator, he has taught master classes, seminars and workshops throughout the world for students and teachers of all levels. Recently, Mr. O'Farrill received the Distinguished Alumnus Medal from Brooklyn College and served as the Alan and Wendy Pesky Artist in Residence at Lafayette College. In the summer of 2007, Mr. O'Farrill served as Visiting Artist at Haystack Mountain School of Crafts. He has recently been appointed Assistant Professor of Jazz at The University of Massachusetts in Amherst.

Throughout the past few years, Mr. O'Farrill has toured throughout the U.S. Europe and Asia. In the spring of 2006, he led the Afro-Latin Jazz Orchestra on a tour of Mexico. In 2007, the Afro Latin Jazz Orchestra left Jazz at Lincoln Center, and moved to Symphony Space to pursue its own educational and performance opportunities. To that end, the Afro Latin Jazz Alliance was created as a not for profit organization dedicated to the preservation, furthering, and education of Afro Latin jazz. A recognized composer Mr. O'Farrill has received commissions from Meet the Composer, Jazz at Lincoln Center, The Philadelphia Music Project, and The Big Apple Circus. He lives in Brooklyn with his wife, classical pianist Alison Deane and their sons, Zachary and Adam.