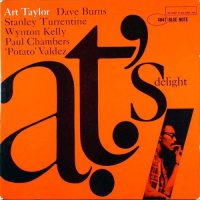 slideshow
Art Taylor was a jazz drummer whose name, sadly, rarely comes up these days. But starting in 1951, Art was in huge demand as a sideman and recording artist. Over the course of his career, according to the Jazz Discography, he recorded on 323 sessions, a sizable number. Nicknamed A.T., or, to those in the know, Mr. Cool, Art established a new, straight-ahead drumming style that was less scattered and more consistently intense, like a pot of water coming to a rolling boil.

In 1986, I remember going up to the apartment where Art was staying in Harlem to interview him shortly after he returned returning from a 20-year residence in Europe. At the time, I was working on a series of essays on jazz expatriates. That afternoon, we sat at a living room table, with a view of Riverside Drive and the Hudson River. As the sun sagged on he horizon, he talked about jazz, living overseas, and why the music was so important and often taken for granted. I did several expat interviews and then a work opportunity came up and I had to shelve the project. I'll have to find the interview with Art and transcribe it.

Throughout the years, starting in 1956, Art led a hard-bop group called Taylor's Wailers. The ensemble initially featured Donald Byrd (tp) Jackie McLean (as) Charlie Rouse (ts) Ray Bryant (p) Wendell Marshall (b) and Art (d). They recorded Taylor's Wailers in February 1957 for Prestige. There also was Taylor's Tenors (1959), with Frank Foster and Charlie Rouse; A.T.'s Delight (1960); Mr. A.T.: Taylor's Wailers (1991); and Wailin' at the Vanguard: Arthur Taylor's Wailers (1992). All of the albums are uniformly strong and showcase Art's drums. [Above, an essay by Ira Gitler from the October 13, 1960 issue of Down Beat. Click to enlarge]

Yesterday, I heard from Jim Eigo, of Jazz Promo Services and Original Records. He passed along a link to Four on the Floor, a blog devoted to jazz drummers and drumming hosted by Jon McCaslin. At the blog was a post on Art Taylor and a video—two hours of Art Taylor at New York's Village Vanguard in the early 1990s, with Abraham Burton (as), Willie Williams (ts), Jacky Terrasson (p), Tyler Mitchell (b) and Art Taylor (d). My guess is that the video is the visual to the audio of the 1992 album mentioned above, but I'm not certain.

And here's a nearly two-hour video of Art being interviewed for an oral history in 1994, a year before his death...

In his 1977 book, Notes and Tones: Musician to Musician Interviews, Art spoke with 27 well-known jazz musicians while he was living in Paris. Before I left his apartment, he pulled a copy loose from a box and gave it to me. The book was inspirational and taught me the level of honesty and emotion you need to get from a subject. As I flipped open the title page last evening, I was reminded of what Art had written to me that day: “To Marc, I know that you know that I know that... Thanks, Arthur Taylor." Art was a great drummer and a great guy.