Armen Nalbandian Publishes First Book: Portrait Of An Artist As A Young Improviser 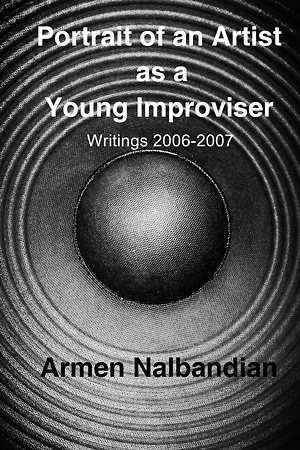 Musician Armen Nalbandian has published his first book; Portrait of an Artist as a Young Improviser, featuring essays and articles written during his tenure as Artist-in-Residence and Musical Director of the Fresno Art Museum, in addition to chronicling the creation if his classic album Manchester Born.

From Blacksmith Brother: A look inside Armen Nalbandian's thought process as he created his classic album: Manchester Born and his performances throughout this time period. This book contains essays and entries written by Nalbandian from 2006-2007. Included are listening guideposts and footnotes looking back on the process. A must read for fans of Jazz and improvised music!

Portrait of an Artist as a Young Improviser is now available worldwide at Amazon.com, Barnes & Noble and your other favorite book retailers!

Armen Nalbandian (b.1978 in Manchester, England) is a jazz pianist, composer & humanitarian.

In addition to the piano, he has been known to perform on the prepared Fender Rhodes mechanical piano, and contributes to produce jazz, improvised and experimental music in California. Nalbandian is the composer of over 600 works in addition to having led more than 20 different ensembles in the past few years. Nalbandian's compositions have included music for his trio, string quartets, orchestral music, music for theater, Armenian folk music, and “game pieces.” His primary ensemble is the Armen Nalbandian Trio.

From 2004-2008, Nalbandian served as the Music Director\Artist-in-Residence of the Fresno Art Museum, Artistic Director of Jazz @ the F.A.M. and curator of the Rhythms of Art. Nalbandian is also the Artistic Director of the F.O.R.M. (Festival of Resurrected Music). Nalbandian is a protegee of pianist John Hicks and has performed with Billy Higgins and Han Bennink. Nalbandian is the founder of Blacksmith Brother Music. In 2008, Nalbandian was named as a finalist in the 2008 Gilles Peterson Worldwide Talent Search. Armen Nalbandian returned to performance on January 20, 2009, as Music Director for the Day One Event, celebrating the inauguration of Barack Obama and a few weeks later in a tribute to Hip Hop producer J Dilla in a benefit for Jay Dee's mother, Ma Dukes.

Nalbandian has frequently used his position as a musician to perform many humanitarian services. Nalbandian has raised thousands of dollars in aid for the victims of Hurricane Katrina by way of many benefit concerts. Nalbandian has also raised money for organizations as diverse as The United Way, The Red Cross, the ONE Campaign, Habitat for Humanity, The American Cancer Society, Breast Cancer Research and The Relay for Life Foundation, among others.

Nalbandian frequently references the art of Jean-Michel Basquiat in his work and song titles. Numerous compositions throughout his discography reference specific Basquiat paintings and graffiti. Two of Nalbandian's albums, “Young King Get Their Heads Cut Off,” and “To Repel Ghosts,” reference Basquiat in their titles; both albums featuring cover art that evokes his art. Nalbandian also presented a concert inspired by Jean-Michel Basquiat's work in March of 2008 during his tenure as Artist-in-Residence at the Fresno Art Museum