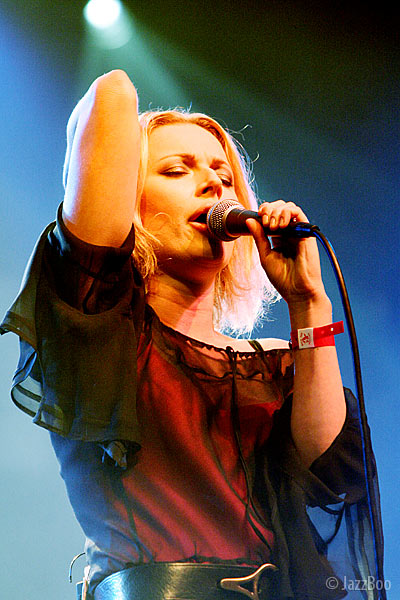 Although Polish singer Anna Maria Jopek is well-respected and recognized by fans in Europe and also the numerous artists she has worked with over the years (including Pat Metheny, Tomasz Stanko and bassist Richard Bona), she has yet to be discovered by mainstream jazz/world fans in North America.

It is hard to gauge why she hasn't yet been more widely discovered Stateside, but one possibility could be the fact that she is a bit hard to pin down when it comes to a specific genre. Jopek has performed in North America a few times, but those concerts were mostly geared to expatriate Polish fans with almost no promotion outside foreign-language media. However, for her 2014 North American tour (which kicks off at New York's Joe's Pub on November 5th) she seems to be looking to change this by introducing her music to a wider audience.

European fans often refer to Jopek as a jazz singer, but her extensive discography proves that not to be exactly true. She is equally comfortable with pop- inflected tunes like her debut single “Ale Jestem" from the 1997 album of the same name (Universal) and takes a lot of inspiration from jazz, as evidenced by discs like Szeptem, (Universal, 1998) which included songs by Krzysztof Komeda and Krzysztof Komeda Bosa, (Universal, 2000) and Upojenie (Nonesuch, 2008)—the latter being arguably her best live recording to date , she delivers a selection of original tunes penned by Jopek and her songwriting partner and husband Marcin Kydryński while Metheny freely improvises around the melodies.

She is, however, far more eclectic—her albums often includes collaborations with African musicians, and she has also ventured into different genders—in 2011, she released Sobremesa (Universal), a disc that pays tribute to the music of Brazil and Portugal. It is an intriguing album that includes fados and sambas sung in Portuguese and Polish, and also featured guest appearances from Ivan Lins, Sara Tavares and Tiago Santos. Also worth mentioning is Secret (Emarcy, 2005), her sole English-language album to date, which featured personal takes on tunes like Sting's “I Burn For You" and No Doubt's “Don't Speak."

For her Joe's Pub appearance, she will be backed by a simple trio rounded out by Marek Napiorkowski (guitar) and Piotr Nazruk (piano), and for the remaining dates in Chicago and Toronto the group will be augmented by Robert Kubiszyn (bass) and Paweł Dobrowolski (drums).