Andrea Brachfeld Releases "Into the World: A Musical Offering" on Shaneye Records

SOURCE: ALL ABOUT JAZZ
September 18, 2008
Sign in to view read count 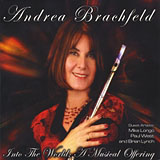 slideshow
Shaneye Records proudly presents Andrea Brachfeld's latest release Into the World: A Musical Offering featuring Mike Longo, longtime musical director for Dizzy Gillespie, Paul West, worldwide known bassist extraordinaire, and Brian Lynch, Eddie Palmieri's trumpet player. The music on the CD ranges from Latin Jazz to Salsa, Yoruban and Hebrew chants, to straight ahead jazz. Andrea's original compositions comprise the majority of the tracks and her compositional skills as well as technical versatility on the flute are outstanding. This CD is “a winner" as Joe Conzo, musicologist says; one not to be missed. Her longtime band members include Bob Quaranta on the piano, Andy Eulau on the bass, Kim Plainfield and Diego Lpez on the drums, and Chembo Corniel on the congas. One of the favorite tracks on the CD, “Passing Friends" is dedicated to the multitude of masters who have passed away in the past couple of years.

“...one of the premier flutists in Latin jazz...Highly Recommended" --Peter Watrous

“Once more, Andrea Brachfeld has released a dazzling new production, “Into the World: A Musical Offering," an effort that showcases her brilliant versatility. Whether it be jazz--Latin or mainstream--or Salsa and Yoruban chants, she sparkles and swings! Vicki Sola, Host & Producer, “Que Viva la Musica," WFDU FM Columnist, Latin Beat Magazine Thousands the world over play the flute, and just a few play it well. Andrea Brachfeld is one of those..." --Max Salazar Columnist, Latin Beat Magazine

Flutist Andrea Brachfeld, is a graduate of The High School of Music and Art and Manhattan School of Music. Over these past 20 years she has recorded more than a dozen CD's with many artists including, Africando, Noel Pointer, and Timbalaye. Her breakthrough performance as the flutist for the popular Latin band Charanga '76, catapulted her into Salsa history and fame as the first female flutist to play this music in the United States. While in high school she received the “Louis Armstrong Award for Outstanding Student" from Jazz Interactions. Study with Hubert Laws, Jimmy Heath, and Mike Longo helped her develop her own style. Downbeat magazine referred to Andrea as “one of the finest jazz flutists around." She has twice been the recipient of the Latin New York Music Award as a flutist.

She has performed with Dave Valentin, Nestor Torres, and Ray Barretto among others. While in Venezuela, she had the honor of opening for Chick Corea,and Paco de Lucia. She was recently awarded the Chico O'Farrill Lifetime Achievement Award from Latin Jazz USA. Her first Latin Jazz CD, Remembered Dreams combines Latin originals with contemporary jazz cuts. Her second CD, Back With Sweet Passion, is a dynamic Salsa recording featuring Grammy winner Oscar Hernandez on piano, and Alfredo De La Fey on violin. Her third CD Beyond Standards is a collaborative effort with Chembo Corniel, featuring jazz greats Hilton Ruiz on piano and Steve Turre on trombone.She has appeared with the Winnepeg Jazz Orchestra as a soloist performing her own compositions as well as those of Mike Longo, longtime musical director for Dizzy Gillespie. She is currently performing with her own group including Phoenix Rising, with a new CD out, Into the World: A Musical Offering with guest artists Mike Longo, Paul West and Brian Lynch.