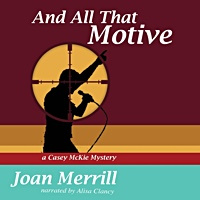 Set at a festival near San Francisco, And All that Motive has Casey racing against time to solve the killing of jazz singer Sid Satin and remove suspicion from her best friend, club owner and singer Dee Jefferson.

Sorting through a raft of suspects, Casey unravels the mystery with one of the most surprising endings of the five-book series.

Alisa Clancy played drums and piano in a high school band, appeared on radio from her schooldays onward, and worked in theatre before becoming program director at KCSM-FM, where she hosted “A Morning Cup of Jazz” for three decades.

Praise for And All That Motive

“While reading this book, one can practically hear the bebop-oriented soundtrack.” —Scott Yanow, Los Angeles Times

“Tough yet warm with a hint of sexiness, (Clancy) sounds like someone you would both like and be careful not to mess with. Not only does she imbue Casey with the characteristics expected in a no-nonsense PI, she also has the skill to make subtle changes to pitch and volume when other characters are speaking, thus making her storytelling real and immediate.” —Bruce Crowther, Jazz Journal