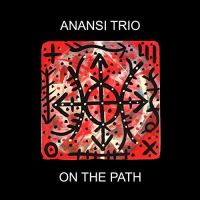 slideshow
The Anansi Trio is a group of like-minded musicians drawing from a wide range of musical influences. Using the language of jazz as their starting point they also fuse elements of Afro-Cuban and Indian music as well as other global traditions. Using percussion, saxophones and acoustic bass they create a music that’s unique and experimental yet remains accessible. With a diverse rhythmic approach and a focus on improvisation, The Anansi Trio hopes to put their own stamp on the American legacy known as jazz.

The origins of the Anansi Trio began when percussionist Mark Merella started developing his hybrid drum kit. Mark had been playing drum set in straight ahead jazz ensembles, while also playing congas and other hand drums in Latin bands and in Afro-Cuban ceremonial settings. Using drum set elements as well congas and cajon he began creating his own signature drum kit.

When it came time to create an ensemble Mark decided he wanted to use some of the rhythms and sounds associated with Afro-Cuban music but didn’t want the band sounding anything like a traditional Latin jazz band. Deciding not to use piano was a big part of the decision, since the montunos and other rhythms the piano provides are such a staple part of Latin music.

Opting for a more open sound associated with free jazz he decided on saxophone and acoustic bass. Mark had worked with saxophonist Matt Belzer in other ensembles and admired his strong playing and compositional skills. Bassist Larry Melton has been playing with Mark since high school so he was a natural choice for their strong rhythmic interplay.

The result is an open sound more associated with folkloric and world music yet with jazz elements and a strong rhythmic groove. Matt wrote compositions with the ensemble sound in mind and the band arranged some tunes by jazz luminaries to fit the instrumentation.

The Anansi Trio has just released their self produced debut album On The Path. The recording features compositions by the group's saxophonist Matt Belzer and also by jazz luminaries including John Coltrane, Bud Powell, Ornette Coleman and Arthur Blythe.

Available on Amazon and iTunes.