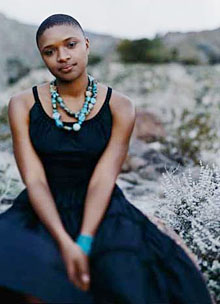 slideshow
An Evening with Lizz Wright

Boston, MA--Jazz at The Wilbur will present “An Evening With Lizz Wright" on Thursday, April 8, at 7:30 PM at the Wilbur Theatre, 246 Tremont Street, Boston, MA 02116. The Yoko Miwa Trio will open the show. Tickets at $38 and $30 are on sale now at all Ticketmaster outlets, at the Wilbur Theatre Box Office, on line at www.ticketmaster.com or by calling: 800-745-3000. For more information please visit www.thewilburtheatre.com.

Lizz Wright's first two Verve releases, Salt and Dreaming Wide Awake, established her as one of the jazz world's most celebrated rising stars, both an accomplished songwriter and a versatile, deeply expressive singer. On her third album The Orchard, the Georgia-bred, New York-based artist takes a substantial leap forward, transcending genre distinctions to deliver a vibrant, intensely creative milestone.

The largely self-penned The Orchard finds Wright mining her own experience to create an unmistakably personal musical statement. The warmth and resonance of Wright's gospel- trained contralto is matched by the intimacy and authority of such original compositions as “Coming Home," “My Heart," “Another Angel" and “When I Fall." Wright's interpretive skills are equally impressive on revelatory readings of the Ike and Tina Turner classic “I Idolize You," Sweet Honey in the Rock's “Hey Mann," the Led Zeppelin ballad “Thank You" and Patsy Cline's haunting “Strange."

The Orchard reflects Wright's lifelong musical journey. The artist was born in the small rural town of Hahira, Georgia, one of three children of a minister father and a mother who sang gospel at church services. In her childhood, she began playing piano and singing in church with her two siblings. In high school, she broadened her musical horizons by studying choral singing, performing with groups of various sizes and winning several regional and national awards.

Wright subsequently studied voice at Georgia State University in Atlanta, and continued her musical education at New York's New School and in Vancouver. Returning to Atlanta, she won considerable regional acclaim after joining the jazz group In the Spirit. In 2002, Wright gained high-profile acclaim for her performances as part of a touring Billie Holiday tribute, for which she was singled out as a future star by several prominent critics.

The New York Times' Stephen Holden praised Wright's “astonishing maturity and poise" and wrote that she “stirs jazz, gospel and rhythm and blues into a reflective, flowing style that elongates songs into prayerful meditations that never wander into vagueness," and described her singing as “pitch-perfect, with a smoky, full-bodied texture... impressive in its steadiness, control and rhythmic subtlety."

Originally from Japan and now residing in Boston, pianist Yoko Miwa has performed with her trio in major cities throughout the world at jazz clubs, concerts, clinics, tours, on live TV and radio broadcasts and in festivals.

Miwa released two CDs on major labels in Japan. Her debut CD, entitled Yoko Miwa In the Mist of Time, was released in 2001 on the Tokuma Label. That year, Yoko was honored as a featured performer in Washington D.C. at The Kennedy Center's “Mary Lou William's Women in Jazz Festival."

In a review of In The Mist of Time, legendary Jazz DJ and critic James Isaac's wrote: “. . . Yoko Miwa demonstrates a full command of the inner-directed, post -- Bill Evans piano idiom, which also takes in the work of Keith Jarrett, Chick Corea, and Steve Kuhn. She amply displays her burgeoning talent as a writer of melodically inviting, impressionistic material, as well as introducing a technically assured soloist with a clean, singing sound and an occasional penchant for the blues in pastels."