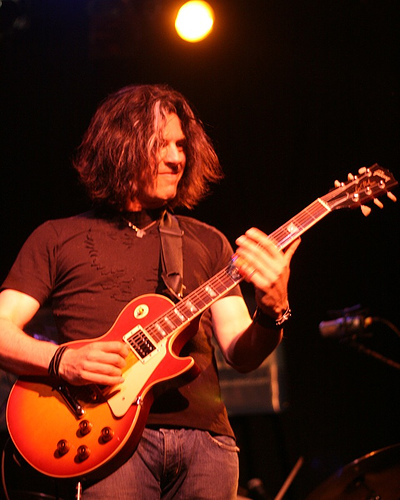 slideshow
People have their own path to becoming a jazz musician. Sometimes a parent or other family member who plays. Sometimes a musician starts off in one direction and then goes in another. Alex Skolnick has to be one of the most unique examples of the latter. The guitarist joined the thrash-metal band Testament when his was 16, immediately putting him on tours with arena acts like Judas Priest, Megadeath, White Zombie and Slayer. Within a few years he began to wonder if there was more out there for him as a musician.

“When we recorded the third Testament album, we did it at the Fantasy Studios in Berkeley," Skolnick tells Spinner. “I remember being on break and hearing the most amazing saxophone playing I've ever heard in my life. It was scary it was going so many places. I hadn't been that blown away since I heard Eddie Van Halen do 'Eruption.' I had my ear to the door of this studio and I didn't know who was inside, or whether it was even a live band."

As it turns out, this dude in a black t-shirt with hair almost to his waist was listening to John Coltrane's 'Live at Birdland' being remastered in a neighboring studio. The track that blew him away? 'I Want to Talk About You' with that a cappella cadenza at the end. It wasn't just the encounter with Coltrane that drew him in; it was other things as well, including seeing a Miles Davis performance on TV in 1988. Skolnick eventually quit Testament and moved to New York to study at the New School's Jazz Performance program, getting his BFA in 2001.

Skolnick joined up with classmate Matt Zibroski on drums and eventually brought in bassist Nathan Peck, who Zibroski knew from growing up in Pittsburg. With his band together, Skolnick set about finding his way as a jazz musician. Now the Alex Skolnick Trio is seeing the release of its fourth album, 'Veritas.' Rather than shredding a bunch of gnarly riffs, he developed a new improvisatory style in the vein of John Scofield, Pat Metheny, Wes Montgomery, Jim Hall and others.

While the new album features nine originals as well as a cover of Metallica's 'Fade to Black,' 2002's 'Goodbye to Romance: Standards for a New Generation' caused a stir in several jazz and rock publications because it prominently featured classic tunes by Kiss, the Who, Judas Priest and others rearranged as if they were jazz classics.

“When we did the first album, we were very determined to do a traditional guitar trio album and keep it within the generally accepted ideas of what that is as far as tones, dynamics and arrangements," the guitarist says. “The only thing that was different was that we were doing Scorpions and Kiss jams. There were a few moments of distorted guitar that were unexpected, but it was done in a way that we felt was interesting. We put some confines on it because that was part of the challenge."

The idea of someone known for metal doing a jazz album was pretty far-fetched back then, but the members wanted to do something that respected the genre of the guitar trio albums. The material also allowed them to look back at Skolnick's roots as a rock musician. But once this was done, the trio featured fewer and fewer covers with each album, fearing that the gimmickry would taint their commitment to being jazz musicians.

Released through imprint of the metal label Magna Carta, 'Transformation' and 'Last Day in Paradise' didn't do much to boost the band's jazz profile, and they got stuck paying some dues that you'd expect to see in a Spinal Tap sequel. It would have been comical if it weren't so frustrating for the band.

“We started getting booked on the wrong types of shows," Skolnick explains. “The trio would be on this bill where all the opening bands were shred-prog-metal bands. I would ask the promoters why they would even think to put us on these kinds of bills and they would say things like, 'You played in Testament.' I would say to them: 'Did you listen to the music? Because we play acoustic jazz. I'm playing through this little amp and I'm supposed to follow guys with arena rock setups?' Most of the time they'd admit that they didn't even listen to our music before they booked us. It's been challenging."

Skolnick also reunited with his Testament bandmates for tours and a reunion album that was strong enough to bring that band back to life, which led to some revelations.

Traditionally speaking, metalheads spend a lot of time discussing what is metal and what isn't. It's pretty much the same rap heard by the self-appointed jazz police, who cry foul whenever they perceive a transgression from the true path of jazz. It would seem that Skolnick has the best both worlds—playing big arena shows and intimate clubs gigs&#151but you could also say that based on the origins of his two fan bases that he's caught between a rock and a hard place.

“There's a parallel between the jazz fans and metal fans," he adds. “It's the whole 'Is it jazz or isn't it jazz?' thing. It's the same with metal—'Is it metal or isn't it?' It's the same thing with a different look. Then there is the fact that both jazz and metal are constantly written off by the mainstream media, but then every once in a while there is an album that comes out that goes mainstream. These genres keep going no matter how much they are written off and I find that fascinating."

The new album is probably the best fusion of the two that the trio has done so far while also branching out. Skolnick hasn't gone back to the distortion pedal and the big amps, but Zibroski playing has a straighter rock feel to it these days. Also, the production on the new album has the drums much higher in the mix than a traditional jazz album, sounding a bit like the Bad Plus or John Scofield's funkier stuff while also retaining an identity of its own. The album has been well received and the band plans to be out in support of the album's early success.

“No matter what, that kind of success is something that not a lot of people get to experience," says Skolnick, giddy with the fact that the album cracked iTunes' Top 10 jazz downloads on the week of its release. “I know musicians who have only played jazz their whole lives who have not been able to experience that. If something like this success would have happened instantly I might have been uncomfortable with it, but it's been so many years. I've paid my dues, and some weird dues too. Yet the music always feels so real and so great."