The song was inspired by our love of early sixties jazz, in particular the Stan Getz and Charlie Byrd collaboration Jazz Samba.
&#151Al Ross 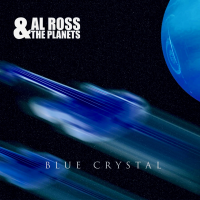 “’Faith’ was written by me and Alex Mungo,” Ross said. “The song was inspired by our love of early sixties jazz, in particular the Stan Getz and Charlie Byrd collaboration Jazz Samba. I had seen the jazz trio Tantrum perform in Oxfordshire, and was so impressed that I invited Paul Jefferies to play double bass on our session. ‘Faith’ came together fairly quickly at Abbey Road Studios. Marc Rapson recorded the piano part on the famous Steinway Grand in Studio 2. He also used the very same Hammond organ that The Beatles played during the recording of Abbey Road.”

When Al Ross and the Planets entered Abbey Road to commence recording Blue Crystal in January 2020, they never guessed that a pandemic was about to turn their plans upside down. Members would soon be sidelined by the virus, travel around London became forbidden, and — when sessions did finally resume in May—there was a long list of safety measures.

“Facing huge obstacles in a horrendous year, with two members getting Covid, we managed to produce a truly great album,” said Ross. “It was a wonderful way to pass the hours rather than staying at home feeling depressed. We were able to create something positive out of 2020.”