SOURCE: ALL ABOUT JAZZ
September 25, 2007
Sign in to view read count 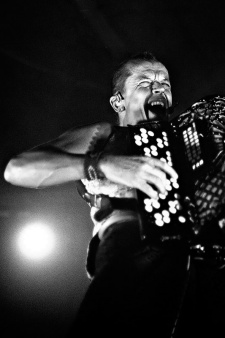 slideshow
To claim that behind every successful man is a strong woman is clearly twaddle. To say that behind every successful (read busy!) Finnish musician is, in one form or another, the Sibelius Academy, is much closer to the mark. Accordionist Kimmo Pohjonen served his time in both the classical Helsinki Conservatory and then the Academy's Folk Music Departments, before stepping out on his glittering solo career in 1996.

From that first concert on, and with the aid of added microphones, digital relays and delays, he has dragged the accordion wheezing, shrieking and wailing into the new century. Taking it by its bellows, and with an acute awareness both of the prejudices the instrument brings as well as the visual appeal it can also offer, he has composed and performed in a multiplicity of styles and tastes. Starting with recordings of modern Finnish folk pieces during his student days, along with JPP founder Arto Jrvel in Pinnin Pojat, Pohjonen progressed to a place in the band of Finnish punk poet and musician Ismo Alanko Sti, then to the founding of an ongoing relationship with percussionist and sampling artist Samuli Kosminen in Kluster.