Home » Jazz News » A trumpeter’s legacy of paying it forward

A trumpeter’s legacy of paying it forward 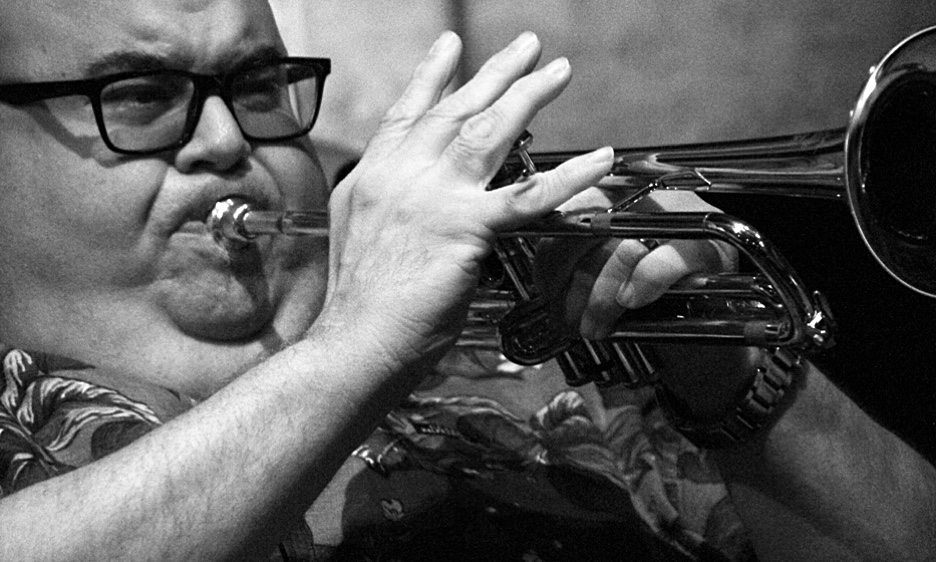 By
September 3, 2021
Sign in to view read count
The fine trumpeter Bobby Shew, now one of the horn’s elder statesmen, gave Dan Miller an unforgettable present on his protégé’s 30th birthday.

As Miller recalls 22 years later, those sage words of wisdom went like this: “You don’t want to be a sideman all your life. You’re going to turn 50 years old and the phone is going to stop ringing. It is not because you can’t play well, it’s because there are two younger generations of players who are working with all the big acts. You have to become your own boss. You have to book your own gigs. You have to teach. You have to do clinics. You have to travel. You have to lead your own bands. You have to diversify how you work in music.”

Miller has done all that with an energy that seems tireless. While he keeps busy as a player, bandleader and trumpet ambassador, the jazz education side of his career seems most satisfying. More so lately in the pandemic environment and being sidelined for the past two months after surgery on a broken foot.

He grew up in Chicago, immersing himself in the Windy City’s jazz scene as a listener and student player. Then he headed to the University of North Texas in 1987, where he found even more mentors, including brass instructor Don Jacoby, before going on the road with the Woody Herman Orchestra two years later.

In 1991, Miller moved to New York City with his brother, trombonist David Miller. Whenever Dan was in town, he made sure to go to pianist Barry Harris’ Tuesday night jazz workshops to soak up more ideas on the art of improvisation. Harris, at 91, still runs his workshops.

Miller’s credentials include work in Harry Connick, Jr.’s big band, the Lincoln Center Jazz Orchestra, Maynard Ferguson and Tom Jones. He began splitting his time between the Big Apple and Southwest Florida in 2004, and has made the Sunshine State his home base for more than a decade. He works regularly in bands co-led with saxophonist Lew Del Gatto, and also leads the Naples-based Gulf Coast Big Band.

He started teaching in 1989 when he was on the road with the Herman band, and has been a Yamaha-supported clinician and performing artist since 1990. In an average year, he does 10 to 12 clinics and master classes out of state, and another 10 in Florida at the college and high school levels, the latter primarily working with all-county jazz bands. His regular stops include Chicago's VanderCook College of Music, Cincinnati Conservatory of Music, Texas A&M, the Interlochen Arts Academy and Hillsdale College in Michigan, the University of Northern Colorado, and Middle Tennessee State, among others.

Miller just started his third year as jazz trumpet instructor at the University of Central Florida after five years as a visiting artist-in-residence in the UCF Jazz Studies Program. He also teaches privately, and is in his seventh year directing the Naples Philharmonic Youth Jazz Orchestra (NPYJO) for students from Collier and Lee Counties.

The pandemic has had quite an impact over the past 18 months. While all travel and in-person events were cancelled, he has kept doing clinics and lessons with Skype and Zoom from his home studio. “It’s an incredible asset to be able to connect with students who only have to put their smartphone on a music stand,” Miller says. “I’m able to teach anyone, anywhere, at any time.” His only caveat to prospective students: they must practice.

This week, he was busy working to recruit the students for the 2021-22 NPYJO season at Artis-Naples. Student auditions are being conducted by video recording, due by September 23, because of the pandemic. The 20-member band will begin rehearsals in early October, studying about and playing the music of select jazz greats.

No matter which subset he is teaching – improvisational concepts on all instruments, working with trumpet players to improve their skills, or leading a student band – he says the motivation is the same.

“When you’ve been the recipient of so much great teaching and inspiration, you want to pass that on,” Miller says. “I’m taking the lessons I learned from them, and adding my own approach to sharing that information with people who are hungry to learn.”