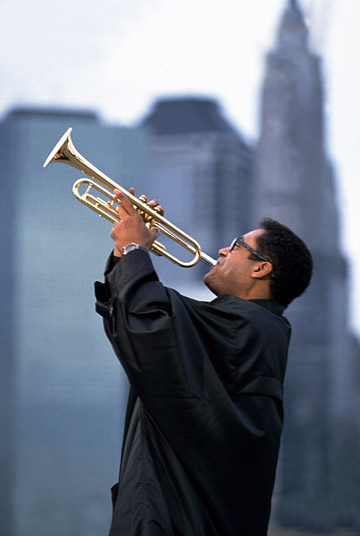 slideshow
Trumpeter Jon Faddis' guest appearance with the Naples (FL) Philharmonic Jazz Orchestra on Wednesday, April 1 had all the ingredients that go into a fine jazz show - extraordinary talent and musicality, doses of humor, and a keen rapport with the audience.

It was also a chance to share the bandstand with a musician with whom he'd crossed paths many times in the Big Apple through the years - tenor saxophonist Lew Del Gatto. Del Gatto, a 25-year veteran of TV's “Saturday Night Live" band, leads the NPJO with pianist Jerry Stawski. The sextet's other members are trumpeter Dan Miller, violinist Glenn Basham, bassist Kevin Mauldin and drummer Mike Harvey.

Faddis mixed sheer power, poignancy and whimsy into his playing, tinges absorbed in some fashion from his mentor, the late Dizzy Gillespie, and then taken in new personal directions. He uncorked some  astonishing high-note solos from time to time during Wednesday's two shows.

The evening's poignancy included the band's rendition of Gillespie's ballad “Con Alma" and Faddis' two duets with pianist Stawski. The first was a thorough exploration of “Round Midnight." The second was a Louis Armstrong tribute on “What a Wonderful World" that featured Faddis on vocals rather than horn.

Next up in the NPJO series: trombonist Wycliffe Gordon is the featured guest on April 22.