Home » Jazz News » A Lousy Day in Harlem is a great day for jazz with The Ed Palermo ...

A Lousy Day in Harlem is a great day for jazz with The Ed Palermo Big Band! Available now! 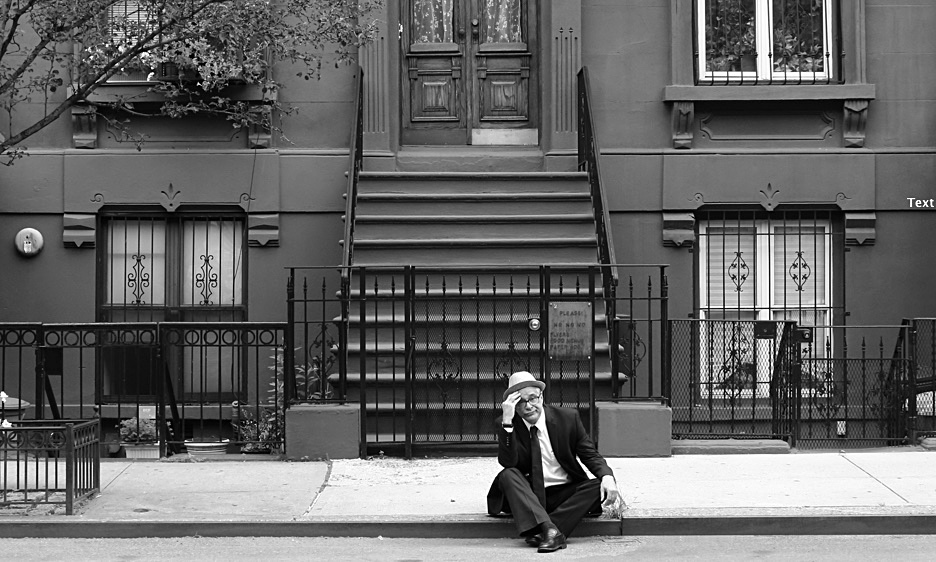 [Ed Palermo] is one of the greatest musicians and arrangers in the world.
&#151Christian McBride 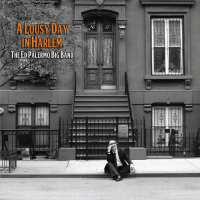 A Lousy Day in Harlem is a great day for jazz with The Ed Palermo Big Band, as the band known for reinventing the music of Frank Zappa turns its attention to a riveting program of Monk, Coltrane, Ellington, and hard-swinging originals, confirming Ed Palermo’s place in jazz’s top ranks of contemporary big band arrangers.

In a radical departure, jazz’s state-of-the-art orchestra—The Ed Palermo Big Band—has recorded a thrilling program of…jazz! An ingenious arranger, composer and alto saxophonist, Ed Palermo has spent much of the past three decades earning international renown with a series of albums transmuting fervidly loved rock songs by Frank Zappa, Todd Rundgren, and their British brethren into supremely imaginative vehicles for improvisation with his 18 piece jazz big band. With  A Lousy Day in Harlem, he unleashes his talent-laden ensemble on a gorgeous array of music by Duke Ellington, Thelonious Monk, John Coltrane, Egberto Gismonti, and his own finely wrought originals. Released on Sky Cat Records, the album captures a master arranger and jazz big band leader at the top of his game, putting his own unmistakable stamp on canonical compositions. Firmly in the tradition, the project reveals that Palermo’s nonpareil gift for recasting beloved tunes encompasses jazz too.

“The thing about this record is, I wanted it to be jazzier,” says Palermo. “We play a lot of jazz in my band, but I’ve been doing Zappa and British Invasion stuff for years and I’ve had these other types of music in my book, jazz tunes that had been close to my heart for decades. I finally felt ready to record these tunes – tunes I’d composed, and tunes I’d arranged. It felt like the right time to show the world another side of the band.”

Palermo doesn’t waste a moment in setting the agenda. The album kicks off with “Laurie Frink,” a surging piece that feels like a theme from a 1970s action film. He rechristened the tune as a tribute to its namesake, a dear friend who played lead trumpet in the band for years. Revered by her peers as a brass savant who mentored generations of trumpeters, “she was just a tremendous musician and a musical partner for decades,” Palermo says. “She used to love this song, so I retitled it after she passed.”

In many ways Lousy Day makes a compelling case for Palermo’s abiding love of luscious melody, like “Affinity,” a winsome piece featuring Cliff Lyons’ expert soprano sax work. And for sheer unabashed beauty it’s hard to surpass Egberto Gismonti’s episodic “Sanfona,” a piece that moves through a variety of emotional spaces without shedding a sense of innocence and discovery. “Brazilians are so much better at creating this kind of emotional material,” Palermo says.

If the album has an emotional centerpiece, it’s Palermo’s “The One With the Balloon,” a playful tune that combines gentle humor, sweet lyricism, and a strikingly graceful tap dance solo in the middle by Nicki Denner. Moving from whimsy to ferocity, he pays tribute to his alto sax hero Cannonball Adderley with a fierce arrangement of Gigi Gryce’s standard “Minority,” which opens with Palermo’s deft orchestration of eight measures transcribed from Cannon’s famous solo.

The band gets Spherical with an ingenious Thelonious Monk medley that opens as “Well, You Needn’t” but quickly sprints into “In Walked Bud,” then references “Straight No Chaser,” and drops hints of “Evidence” too if you listen closely to the rhythm section. It’s an off-kilter tour de force, but not nearly as wacky as his tenor battle “Giant Steps,” a showcase for saxophonist Bill Straub and Ben Kono by way of the dueling banjos in Deliverance.

The album comes rushing to a sensational close with “Gargoyles,” a brilliant piece by Renee Rosnes and Walt Weiskopf that Palermo learned from Billy Drummond’s 1993 album The Gift (though it’s better known from Rosnes’s 2001 album With A Little Help From My Friends). It’s a careening post-bop thrill ride that keys on Kono’s brawny tenor solo and Bailey’s flashing trumpet. And as a sweet kiss off, Palermo concludes the adventure with the appropriately brief foray into rhythm changes, “This Won't Take Long,” featuring his fiery alto.

All in all, Palermo’s A Lousy Day In Harlem makes for a thrilling musical outing, even if his very big band failed to show up for the cover art photo shoot. Palermo’s photos were taken on the steps of the same brownstone where Art Kane captured 57 jazz legends and sundry neighborhood kids for Esquire magazine on that fateful summer morning in 1958. His kidding reference to the iconic jazz image “A Great Day in Harlem” makes sense given Palermo’s off-beat, self-deprecating humor and the album’s mission to align The Ed Palermo Big Band within the esteemed tradition and history of jazz. Previous Palermo Big Band releases celebrated such other musical genres as pop, rock and blues, as broadcast by their humorous cover art. Most recently, 2017’s The Adventures of Zodd Zundgren (Cuneiform), zigzagged between the music of Todd Rundgren and Frank Zappa, and featured a drawing of Palermo on the cover, dressed like a comic book super-hero. Earlier that year, he released the acclaimed double album The Great Un-American Songbook Volumes 1 & 2 (Cuneiform), planting a DayGlo American flag in British Invaders like The Beatles, The Rolling Stones, Jeff Beck, King Crimson, Traffic, and Jethro Tull.

Palermo’s sojourn away from the straight and narrow path of straight-ahead jazz has roots in his origins. Born in Ocean City, New Jersey on June 14, 1954, Palermo grew up in the cultural orbit of Philadelphia, which was about an hour drive away. He started playing clarinet in elementary school, and soon turned to the alto saxophone. He also took up the guitar, and credits his teenage obsession with Zappa to opening his ears to post-bop harmonies and improvisation.

Palermo caught the jazz bug while attending DePaul University, and took to the alto sax with renewed diligence inspired by Phil Woods, Cannonball Adderley, and Edgar Winter (the subject of an upcoming EPBB project). Before he graduated he was leading his own band and making a good living as a studio player recording commercial jingles. But like so many jazz musicians he answered New York’s siren call, moving to Manhattan in 1977. After a year of playing jam sessions and scuffling Palermo landed a coveted gig with Tito Puente, a four-year stint that immersed him in Afro-Cuban music.

An encounter with trumpeter Woody Shaw’s septet at the Village Vanguard in the late 1970s stoked his interest in writing and arranging for larger ensembles, and by the end of the decade he had launched a nine-piece rehearsal band with five horns. Between Don Sebesky’s well-regarded book The Contemporary Arranger and advice from Dave Lalama and Tim Ouimette, “I got a lot of my questions answered, and I’ll love them forever,” Palermo says. “Then the real education was trial and error.”

Palermo had been leading his big band for more than a decade before the Zappa concept started coming together. Inspired by electric guitar master Mike Keneally, who performed with Zappa on some of his final concerts before his death in 1993, Palermo decided to arrange a program of 12 Zappa tunes. When the time came to debut the material at one of the band’s regular gigs at the Bitter End in early 1994, a sold-out crowd greeted the band.

He earned international attention with the ensemble’s 1997 debut The Ed Palermo Big Band Plays Frank Zappa on Astor Place Records. With Palermo’s brilliant arrangements and soloists such as Bob Mintzer, Chris Potter, Dave Samuels, Mike Stern, and Mike Keneally, the album made an undisputable case for the Zappa jazz concept. While Palermo has written more than 300 Zappa charts, he’s cast an increasingly wide net for material. On 2014’s Oh No! Not Jazz!! and 2016’s One Child Left Behind (both on Cuneiform), he explored many of his original compositions and material by composers not named Frank Zappa.

Nothing demonstrates the ensemble’s ongoing vitality better than the stellar cast of players, with longtime collaborators such as baritone saxophonist Barbara Cifelli, drummer Ray Marchica, and keyboardist Ted Kooshian. Many of these top-shelf musicians have been in the band for more than a decade, and they bring wide-ranging experience, expert musicianship and emotional intensity to Palermo’s music. Embracing his iconoclastic reverence, a sensibility he sums up as “nothing is sacred and everything is sacred. It’s all done with love,” the ensemble takes jazz places it rarely gets to go.

With a monthly residency at Iridium, bi-monthly gigs at The Falcon, and performances at jazz festivals in the US and abroad, the Ed Palermo Big Band continues to reach new audiences. In returning to his jazz roots, A Lousy Day in Harlem makes an incontrovertible case that Palermo belongs in the top ranks of the music’s arrangers. A Lousy Day like this one certainly deserves another.