A Constellation Of Friends Helps Keyboardist Patrick Bradley Get Heard 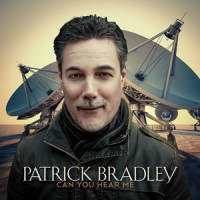 “Can You Hear Me,” due September 23, features guest stars Dave Koz, Rick Braun and Eric Marienthal on the contemporary jazz fusion set produced by Jeff Lorber.

Aliso Viejo, CA: To bolster his effort to be heard above the incessant din cluttering our world, keyboardist Patrick Bradley called upon a few high-profile friends on his third album, Can You Hear Me, produced by jazz fusion icon Jeff Lorber, which is slated for release September 23 on the Patrick’s Music Factory label. Boil it down further and the desire to be heard by our parents is inherent in all of us, which is the genesis of the title track and first radio single, a plaintive piano lullaby graced with the serene soprano sax presence of Dave Koz on the song inspired by Bradley’s late mother.

Collaborating on their second album together, Bradley and Lorber composed and arranged all ten songs on “Can You Hear Me.” Bradley nimbly emotes graceful harmonies on piano, adds depth and texture via gurgling Moog synthesizer embellishments and uncorks feverish organ blasts with reckless abandon when the mood to pontificate strikes. A variety of jazz visages – fusion, contemporary and smooth - emerge from tracks rooted in R&B that reflect prisms of funk, soul and blues with the deep-pocketed grooves stitched by bassist Jimmy Haslip and drummer Gary Novak. David Mann’s fiery horns and crisp horn arrangements fatten the sound on “Blue Skies,” “Daylight,” “For Her” and “Voyage” with hitman Rick Braun captured blowing away on trumpet on a pair of cuts (“Blue Skies” and “Voyage”) and Eric Marienthal chiming in some swinging sax on a few numbers (“Blue Skies,” “Shoreline” and “Catalan”). Lorber’s keyboard and Dwight Sills guitar riff rhythmically throughout the session with Sills and guitarist Michael Thompson dousing kerosene before slash and burn solos. Both Bradley and Lorber solo on the blistering progressive rock thrill ride “North Of Evermore.”

“I’ve been playing my whole life and I’m trying to be heard in this noisy world as a musician. My mom passed before hearing my last album (“Under The Sun”) including the song I wrote for my (late) father (“Tears From The Sky”). I wonder if she can hear me and my music. I wrote ‘Can You Hear Me’ with her in mind, but it is also a question I ask God as well,” said Bradley, a man of faith who hails from Southern California. “The original album title was ‘All In’ (the first song on the record) because I wanted to dig deeper than ever before. The whole purpose of the album was to make sure that I got all of my musical chops into it and I think we did it.”

Bradley’s professional music career began as a member of a rock band (Joshua) signed to Polydor Records. He released his solo debut, “Come Rain or Shine,” in 2006, the title cut hitting the Billboard Contemporary Jazz Singles chart. “Under The Sun” arrived in 2011 and a few tracks from the offering garnered radio play while the album peaked at No. 6 on the Smooth Indie Chart. Over the years, Bradley and Koz have cultivated a friendship with the multimedia sax personality inviting Bradley to perform aboard the Dave Koz Cruise to Alaska next month as well as to open for Koz, Mindi Abair, Gerald Albright and Richard Elliot’s “Summer Horns” concert September 19 in Newport Beach, Calif. Balancing dual careers, Bradley “sunlights” as president of the Southern Pacific region for Whole Foods Market.