A Celebration of the Life of Joe Maneri 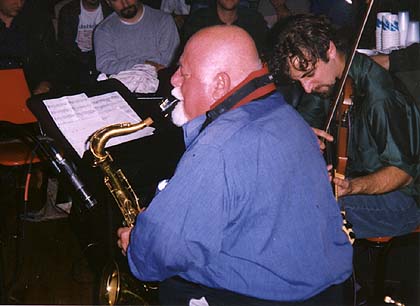 slideshow
A Celebration of the Life of Joe Maneri
Irondale Center
February 9, 2010, 8pm

A concert to remember and celebrate the life of Joe Maneri

Suggested donation $10 to be donated to Boston Microtonal Society

Irondale Center, Brooklyn, NY, February 9, 2010, numerous musicians will gather together to celebrate, through music, words and stories, the life of the late composer, improviser, educator, saxophone and clarinet player, Joe Maneri. Joe, who passed away in August, 2009, was little known to many mainstream music lovers but to those fortunate enough to play music with him, to see him perform live or are lucky enough to have heard some of his recorded music, he has been named a godfather of the improvisational jazz scene who is sorely and sorrowfully missed.

Joe, who studied under Joseph Schmidt (a former Schoenberg student), composed in the twelve tone style but ultimately forged ahead into microtonalism using a 72 note, equal tempered scale. He was the co-author of “Preliminary Studies in the Virtual Pitch Continuum", and co-inventor of a microtonal keyboard. Joe founded the Boston Microtonal society. Erich Leinsdorf, music director of the Boston Symphony Orchestra, commissioned him to write a piano concerto in 1963, the piece, “Metanoia,” premiered in 1985, at Alice Tully Hall in New York's Lincoln Center.

Joe Maneri was also a committed and unique educator, holding court for 37 years with his original approach to teaching at the New England Conservatory of Music who, in March 2009, presented him with an honorary doctorate degree. Many acclaimed musicians heard regularly in New York and Europe studied under Joe and will remember, as numerous others will, the joy of receiving the infamous “love line" as the top grade for their studies.

In the 1990's Joe began to perform in a more public arena with his son viola player Mat Maneri, bassist John Lockwood and drummer Randy Peterson in the Joe Maneri Quartet. The group gathered a dedicated following which saw them perform throughout Europe and North America. In 2003 writer Harvey Pekar, a huge supporter of Joe's music, featured his music for the biographical film “American Splendor".