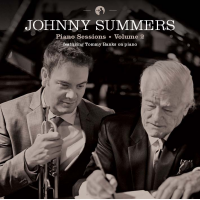 slideshow
Most musicians say they are lovers of great songs, but very few are able to show it in the way that Johnny Summers does! With the new album, Johnny Summers: Piano Sessions – Volume 2, 2015 winner of three Global Music Awards including Best Male Vocalist and Album, Johnny Summers shows why he has become Canada’s best kept musical secret in Jazz.

Hailing from Calgary, Alberta in Canada; for the past 10 years Johnny has been the Artistic Director of the Calgary Jazz Orchestra, a repertory orchestra which is Canada’s only year round performing large jazz ensemble. In this capacity, Johnny Summers has performed as featured trumpet soloist, and conductor during its regular season performances. With Piano Sessions – Volume 2, Johnny continues his musical odyssey in his search for great songs, that he began with his previous album, Piano Sessions: Volume 1.

Piano Sessions Volume 2, with liner notes written by the Wall Street Journal’s Will Friedwald, contains a cornucopia of jazz standards, classic blues, and thoughtful original compositions penned by both Johnny and Tommy Banks. The album comprises (14) tracks, and places the piano and voice/trumpet at the center piece of every song. Accompanied by award-winning pianist, and former Canadian Senator, Tommy Banks on all tracks, Johnny brings in a “who’s who” of top Canadian Jazz musicians as special guests including the following: Jeremy Brown, Tenor Saxophone; Eric Allison Brown, Tenor Saxophone, Kodi Hutchinson, Acoustic Bass; and Brendan McElroy, Acoustic Bass & Vocals.

“Piano Session Volume 2 is completely different than Piano Sessions Volume 1, but yet its similar.” says Johnny. “While with the recording I really sought to open things up musically, to strip things down and allow the real tune to come through, not the production but the song and musicianship of everyone—we wanted to create original music which paid homage to the past and was fresh and new. We wanted to write music that had the quality ofjazz standards we grew up loving but with a contemporary feel.”

“The core of the album as always is the interplay between Johnny and Tommy—even though they're joined by bass, various saxophones, and guitar on roughly a third of the album, the other instruments add to the collaboration rather than detract from it," says liner notes writer Will Friedwald. “The difference between them, generationally, is more substantial than either of them would probably care to discuss, but throughout the two are consistently on the same page musically, whether in composing and performing new songs together or reinterpreting the classics. As both trumpeter and vocalist, Johnny consistently runs off to some unexpected place or other, but whenever he gets there, he invariably finds that Tommy is already there, waiting for him. Ain't that brilliant?"

SummerTime Music is proud to herald the release of Johnny Summers: Piano Sessions Volume 2 available at your favorite digital or physical retailer world-wide. For more information on Johnny Summers or to request a review copy visit (www.nujazzagency.com) or e-mail: [email protected].

Track Listing: Ain’t I Brilliant, The Way You Make Me Feel, You’ll Never Work a Day in Your Life, Star Dust, Outta My Mind, Rockin’ Chair, If You Have to Ask, Free Since I Met You, Blues in the Night, You’re The One, Moonglow, So Much in Love, If I Could Be, The Long, Hot Summer.