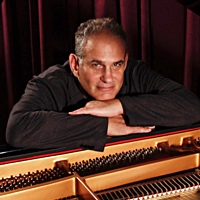 slideshow
3-time Emmy-nominated composer Steve Sandberg’s ArtistShare debut, Alaya, is hailed as a breakthrough recording whose compositions masterfully blend classical and world music genres with the excitement of virtuosic improvisation. We are proud to submit Alaya for this year’s Grammy nomination consideration in the Contemporary Instrumental genre. Alaya started as an All About Jazz/Launchpad project and was picked up by ArtistShare after a highly successful fan- funding campaign.

Alaya, both exhilarating and deeply poetic, represents Sandberg’s lifelong dream to create original compositions that draw on his extensive experience with world and classical music, and present these in a live acoustic band. Sandberg grew up studying classical music, and went on to explore music from around the globe. He worked with Celia Cruz, Bebel Gilberto, sang North Indian raga, and much more. The Steve Sandberg Quartet is rounded out by violinist Zach Brock, drummer Mauricio Zottarelli, and bassist Michael O'Brien.