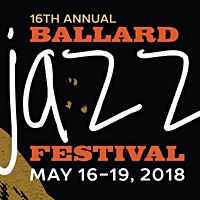 Penn Station explores the eclectic world of the compositions of the great Thelonious Monk, with a very contemporary twist. Stenmark approaches jazz through the lens of traditional Swedish melodies, tempered by New York style post bop sensibility. Penn in many ways typifies the approach of artistic directors John Bishop and Matt Jorgensen, who focus on bringing in an artist highly regarded in the jazz community, ready for discovery by the Seattle jazz audience. Penn has established himself as both a leader and sideman, paying his dues performing with iconic artists such as Betty Carter, Jimmy Smith, Dave Douglas, and Stanley Clarke.

Taking place over four days in historic Ballard, this year's event has taken on a few notable changes. The Mainstage Concert, normally the closing event on Saturday evening, moves to Friday, while the ever popular Ballard Jazz Walk will be held on Saturday. This enables the expansion of the walk to the afternoon hours, beginning with the Saturday Jazz Picnic at Peddler Brewery, an all ages event that welcomes families, and under twenty-one jazz fans. Vibraphonist Susan Pascal with perform with a quintet that includes legendary tenor saxophonist, Pete Christlieb.

Promoted by Seattle based Origin Records, the event has maintained a true Seattle feel, presenting Seattle jazz fans with the opportunity to take in the best of the Seattle jazz scene, mixed with national and international artists. “I want to make sure it's a local festival, so it sounds like Seattle," Bishop has maintained throughout the festival's remarkable sixteen year run. The Seattle jazz scene's annual rite of spring connects the city's historic and colorful jazz past, with the modern progressive mindset of its vibrant present.

Thursday brings the “Guitar Summit" to Conor Byrne, featuring bands led by guitarists Milo Petersen, John Stowell, and Andy Coe, each bringing their unique tie into the jazz tradition. Stowell has a long history in live performance and recordings, most notably with bassist David Friesen and the trio Scenes, with Jeff Johnson and John Bishop. Seven-string guitar ace Petersen has long been Seattle's first call guitarist, honing his chops with luminaries Cedar Walton, Ernestine Anderson, and Elvin Jones to name but a few. Andy Coe has taken his progressive approach to guitar into the jazz genre, as well as the well established jam band scene in the Pacific Northwest. He is known in Seattle for his work with Skerik's Bandalabra, McTuff, and the jam ensemble, The Andy Coe Band.

The Mainstage Concert on Friday evening, May 18, features the aforementioned Penn, and Stenmark, housed in the brand new Nordic Museum facility at 2655 NW Market St. in Ballard. The facility will open on May 5, so this performance will be literally “groundbreaking." The new digs also provide a larger capacity, enabling more seats for this perennially sold out show.

The Ballard Jazz Walk on Saturday May 19 features twenty-one bands in ten venues strewn from the Ballard Bridge, down old Ballard Avenue, and up onto Market St. The event creates a Bourbon St. like atmosphere for one celebratory evening in old Ballard. It gives area jazz fans the opportunity to sample the amazing depth and quality of the Seattle jazz scene in one location, on one night. The walk upholds the long held Seattle tradition of pairing the best of the Seattle scene with visiting jazz dignitaries. It is how the festival began in year one, and remains the one day of the festival that is an absolute “can't miss" event on the Seattle music calendar.

The uncertainty of the completion date of the new museum, coupled with the loss of a few venues on Ballard Avenue, raised some concern about the viability of the event going forward this year. Bishop and Jorgensen had to come up with an alternative plan. “The biggest challenge was out of fear, just the fear of not being able to come up with something," says Bishop. In the end, the facility became available, and provided the means to create an even more viable future for the festival. “This is a huge step up. We thought we were lost, but now we're found. There's lots of room to grow, if we're smart about it," remarks Bishop, alluding to the myriad of possibilities the new facility presents.

The Ballard Jazz Festival is a mirror that reflects the current state of affairs out on the jazz scene in Seattle throughout the year. In many ways, it upholds the tradition one can experience year round in clubs and concert halls throughout the city. It is four days that jazz aficionados, and those new to the genre can witness jazz played at the highest level in a way that tells our story here in Seattle.