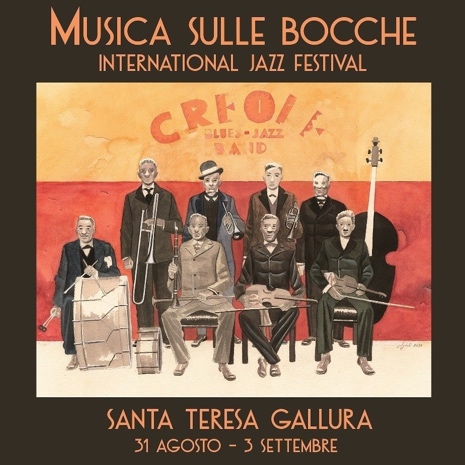 Among the many festivals dedicated to jazz music in Italy, “Musica sulle Bocche” is characterised, since its first editions, by the close bond between music and landscape and for its innovative artistic choices. Directed by the musician Enzo Favata, the festival has brought to the extraordinary landscapes of Santa Teresa Gallura not only many international stars, but also young talents of jazz and other genres of music.

The natural scenery of Gallura and the programming of the concerts in unusual hours, such as sunset and sunrise, has created around the festival “Musica sulle Bocche” a powerful allure. The images taken on video or camera and shared on social media go around the world and the pictures taken by the official photographers are selected for exhibits and international campaigns.

The 2017 edition presents great names of the current world jazz scene, of electronic music and of experimentation, with intersections with traditional music from Sardinia and from other countries. A very intense and varied programme, whose guideline is always the same as suggested by the festival: curiosity, openness towards different music, without preconceptions and without fear. For this reason, besides the essentially musical offer, the festival opens itself to other artistic languages: photography, digital arts (visual art/digital painting), graphic design and visual arts in general will also be represented in this edition.

The programme for the 2017 edition includes some of the most renowned artists of the contemporary jazz scene, such as the Polish pianist Marcin Wasilewski with his trio (1st September) and the French saxophonist Thomas de Pourquery with his group Supersonic and cosmic music inspired by Sun Ra (31st August). Italian jazz, of internation prestige as well, is represented by two names that belong to two different generations: Filippo Vignato (best talent in the 2016 jazz competition), in a trio with other young names of the European scene; Roberto Ottaviano, head master of Italian saxophonists that brings two of his projects to the festival, one of which is a homage to Philp Glass, the contemporary composer who is celebrated all over the world this year for his 80th birthday. Roberto Ottaviano at the soprano sax will guide the “Sonic Hologram Sax Quartet” of the Conservatory of baritone in the concert that interprets the music of the American composer in the special event of the concert at sunrise on the Rena Bianca beach (3rd September). Roberto Ottaviano will be present at the festival with another project, “Troi Griots”, together with Giovanni Maier at the double bass and Zeno De Rossi at the drums (2nd September)

The original production “Tangerine” (2nd September), directed by Enzo Favata, is inspired by the psychedelic sound of the “Tangerine dream” revisited in the digital era, and will see the participation of musicians of great calibre like the double bass player Salvatore Maiore, the guitarist Marcello Peghin and Filippo Vignato at the trombone, together with the young talent at the drums Alessandro Cau.

As always, the festival is open to new music and experimentations: the first concert located in the scenery of Cala Grande/Valle della Luna (31st August) will be held by Murcof, art name of Fernando Corona, the Mexican artist now living in Barcellona who belongs to the experimental scene; while sunset at the Lighthouse of Capo Testa (3rd September) is entrusted to the young but successful Sebastian Plano, Argentinian, that is at the borderline between contemporary classical music and electronic music.

The rural Sanctuary of Buoncammino hosts world folk music as in the past editions. The Japanese musician Miki lmai, (1st September), will perform instrumental music pieces of oriental tradition with the koto (harp) and the niko (two-string fiddle). On 2nd September the Sanctuary will reverberate with the sounds of the songs “a Cuncordu”, the voices that accompany the rites of the Holy Week in Sardinia, in one of the most representative choirs of this tradition, Sos Cantores di Cuglieri.

The space for young emerging talents, launched by the Festival “Musica sulle Bocche” three years ago, will be presented once more as the closing event: the FRINGE MSB on the last evening (3rd September) hosts a selection of musical projects, chosen through a call addressing the young realities, new and unpublished productions, often of great quality, but that rarely find suitable space and audience. “Musica sulle Bocche” wants to encourage young talents in the genres of jazz, blues, rap and hip hop, electronic and multimedia productions.

The concerts will be held in the location of Piazza Santa Lucia, where a theatre stage will be mounted, near the area of the “Mercato MsB”, a social space to share good local food and wine. Other locations already successfully tested: Cala Grande/Valle della Luna, Capo Testa, Sanctuary di Buoncammino, Rena Bianca Beach.

Along with the concerts, as always, there will be other events: art exhibits, music workshops, visual arts with the use of new technologies and laboratories in order to stimulate the interest of different audiences.

The concerts performed during the evening at the “Festival Musica sulle Bocche” are always accompanied by a visual show with digital techonologies. The town square will be transformed into a theatre, not only for music, but also as a place for visual art.

Every year the Festival “Musica sulle Bocche” entrusts the creation of its image to a visual artist. This year the artwork is by Igor Tuveri, a Sardinian artist with international acknowledgements, considered as one of the fathers of the graphic novel in Italy.

The photography exhibit of the sixteen years of Festival tells the story of this show through the report made by different photographers, among the others Ziga Koritnik and Giulio Capobianco, whose pictures have been present for two years in the “Jazz World Photo” travelling exhibit.

Jana Project will implement actions to involve the local community and will be open to exchange with the cultural realities of Santa Teresa Gallura. The official programme includes the exchange of shows with the association Officine Peregrine: the Festival Teatri Peregrini, scheduled between May and June, will host a concert of electrical and acoustic guitar of Marcello Peghin (11th June), while the theatre play “Tessuto Donna”, produced by the theatre association, will be performed in the natural setting of the island of Municca as opening show to the Festival “Musica sulle Bocche” on the morning of 31st August.

The “market” was once a place where people would meet and exchange not only goods, but also ideas, news, feelings and a vision of life. The aim of the “Mercato MsB” is to bring people to meet and make conversation around the good food and wine of Sardinia, discovering territories and cultures, experiencing ways to safeguard the environment and our sense of humanity.

The Festival “Musica sulle Bocche” is a creation of the concert association Jana Project that takes care of all the phases of production. Founded in 1998 in Alghero, today it is one of the most active cultural realities in Sardinia in the field of music production and diffusion. As already happened in the past years, the organisation has adopted “green policies” both internally and externally to contain as much as possible the Festival’s impact on the environment: avoiding waste, recycling, eliminating disposable plastic objects, printing on ecological paper, using public transport or sharing private ones, respecting the places that host the shows; these are all pointers the festival promotes through its channels of communication.