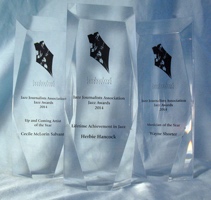 Piano jazz is a major focus of the 2015 Jazz Awards, as pianist Jason Moran, artistic director of jazz at the Kennedy Center, is cited as Musician of the Year, and pianists Kenny Barron, Chick Corea and composer-arranger-orchestra leader Arturo O'Farrill receive Awards in other categories. Besides being deemed Pianist of the Year, Kenny Barron with bassist Dave Holland wins the Duo or Trio of the Year Award, and their album The Art of Conversation (Impulse!) is Record of the Year.

Winners of 2015 Jazz Awards for excellence in media categories will be announced at the Blue Note cocktail party with music by bassist-vocalist Mimi Jones' band, singer Antoinette Montague accompanied by keyboardist Dannie Mixon, and Fula Flute, the duo of Bailo Bah and Sylvain Leroux. Musician winners of 2015 JJA Jazz Awards and 2015 Jazz Heroes are invited to the Jazz Awards party at the Blue Note as guests of the JJA, but must reserve tickets.

Jazz Awards winners receive engraved statuettes, presented at their summer performances across the United States by JJA member writers, photographers, broadcasters and new media professionals. Jazz Awards winners are determined through open nominations and direct voting by members. The JJA Jazz Awards were established in 1996. Winners of all years and nominees for 2015 are searchable at the JJA website.

Musician of the Year:
Jason Moran

Up and Coming Artist of the Year:
Cecile McLorin Salvant

Arranger of the Year:
Maria Schneider

Record of the Year:
The Art of Conversation (Impulse!)
Kenny Barron and Dave Holland

Trio or Duo of the Year:
Kenny Barron and Dave Holland

Trumpeter of the Year:
Ambrose Akinmusire

Trombonist of the Year:
Steve Turre

Flutist of the Year:
Nicole Mitchell

Clarinetist of the Year:
Anat Cohen

Guitarist of the Year:
Mary Halvorson

Pianist of the Year:
Kenny Barron

Bassist of the Year:
Christian McBride

Violinist/Violist/Cellist of the Year:
Regina Carter

Percussionist of the Year:
Pedrito Martinez

Player of Instruments Rare
in Jazz of the Year:
Edmar Castaneda, harp