2015 Is Year Of John Coltrane: 50th Anniversary Of" A Love Supreme," A New Documentary, And Grammy Win For Offering 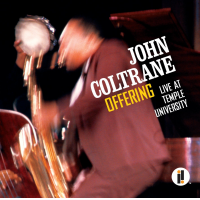 Exactly fifty years after John Coltrane’s most successful year of his career—when in 1965 he achieved a best-selling album with A Love Supreme, earned two Grammy nominations and was inducted into Down Beat magazine’s prestigious Hall of Fame—the saxophone legend stands to reach another peak of popularity and awareness. In 2015, Coltrane will be the subject of a new documentary produced in association with his son Ravi Coltrane. There will be various performances, presentations and discussions celebrating the golden anniversary of his magnum opus album A Love Supreme. And the most recent release of Coltrane music—Offering: Live At Temple University, a recording of his legendary 1966 concert—notched a Grammy win on February 8 as Ashley Kahn received the “Best Album Notes” award by The Recording Academy. Kahn is also co-producer of Offering: Live At Temple University and was instrumental in its getting released.

Ashley Kahn is a noted jazz historian, educator and producer. He is the critically acclaimed author of A Love Supreme: The Story of John Coltrane’s Signature Album, as well as Kind of Blue: The Making of the Miles Davis Masterpiece and The House That Trane Built: The Story of Impulse Record. In 2004 and 2011, he received Grammy nominations as a writer in the Album Notes Category for Four Women: The Nina Simone Philips Recordings (Nina Simone) and John Coltrane - Side Steps (Prestige), respectively. This year is his first win. Kahn’s prolific liner notes have also garnered him with three ASCAP/Deems Taylor Awards, and two “Book of the Year” distinctions from the Jazz Journalists Association. As a journalist, Kahn’s contributions have appeared in the New York Times, DownBeat, Rolling Stone, among others, and his voice is often heard on National Public Radio's “Morning Edition”. He is an adjunct professor at New York University.

This resurgence of interest on John Coltrane’s music and career reflects a musical influence and commercial impact that has yet to abide since the saxophonist’s death in 1967. His recordings continue to be studied and celebrated by musicians and music fans alike; the overwhelmingly critical success of Offering this past year stands as further proof of the timeless nature of Coltrane’s musical innovations. As Kahn, a Coltrane scholar who has authored two books on the legendary jazzman (A Love Supreme: The Story of John Coltrane’s Signature Album and The House That Trane Built: The Story of Impulse Records), has written:

To many, [Coltrane’s] music defined the last great innovative leap in jazz... In other musical territories—R&B, soul and rock—contemporary saxophonists seem unable to touch their instrument without quoting from his distinctive, vocal-like vocabulary of slurs, shrieks and rapid-fire runs. Since his death, Coltrane has become a patron saint of creative discipline: worshipped as a paragon of artistic commitment and uncompromising credibility. For African Americans, he has attained the rank of prophet, sitting among a pantheon of race-lifting message-givers...

Kahn is proud to have added to the wealth of knowledge supporting Coltrane’s legend but admits that “the lasting power of Coltrane’s music and his universal message of connection and love needs no help in transcending the passage of time—what he left us is self-perpetuating and ceaselessly relevant. To know that generations to come will be able to listen, enjoy, and be inspired by recordings like A Love Supreme and Offering is perhaps the most satisfying return of all.”

Offering: Live At Temple University, released on September 23 of this year by Impulse/Resonance Records, is the long-awaited recording of Coltrane’s historic 1966 performance featuring his saxophone playing and wordless singing—an epic concert that featured a full percussion line, and inspired many in attendance (like saxophonist Michael Brecker and music critic Francis Davis) to their respective careers. Kahn’s 5,500-word essay in Offering—the first release of new Coltrane music in almost ten years—features quotes from Brecker, Davis, and other witnesses and participants who were in attendance that evening, including members of Coltrane’s band, serving as a virtual roundtable of memories and insight explaining the historic importance of the concert, how it reflected Coltrane’s musical path and spiritual growth, and the significance of the vocal chanting that was an unexpected and memorable part of Coltrane’s performance that evening.

As Kahn writes, the concert was A ninety-minute session of sustained intensity: experimental, frenzied at times, and deeply spiritual... That mid-November evening in north Philadelphia, Coltrane was full of life and in prime, late-career form: pointing the way forward for generations of players to come, pushing the music to exhilarating, spiritual heights that caught most by surprise. In 1966, that wasn’t what jazz performances were about—not yet.

Offering: Live At Temple University was produced by Resonance Records with Universal Music Enterprises, owners of the Impulse Records catalog, in conjunction with Ravi Coltrane, son of John and Alice Coltrane, using recently discovered tapes that captured the entire concert, originally recorded by student engineers at WRTI, Temple University’s radio station. The 2-LP edition of the album was mastered for vinyl and pressed on 180-gram vinyl at 33-1/3 rpm by audiophile avatars R.T.I. (Record Technology Inc.)