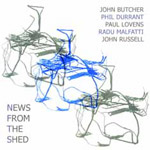 In the past half dozen years or so, as saxophonist John Butcher has become more and more recognized in the world of very quiet improv, interest in the early vinyl releases on his Acta label has increased. His 1992 solo disc 13 Friendly Numbers was issued on CD last year by the Dutch Unsounds label, and now Emanem has brought another one of the Acta records—certainly more talked about than heard—to the digital fore.

Butcher began playing in a trio with violinist/electronicist Phil Durrant and guitarist John Russell in 1984; two years later they invited percussionist Paul Lovens and trombonist Radu Malfatti to join them for a tour of England. While the initial trio carried on for a couple more years, the new quintet began to gather momentum. Originally called Quaqua (a term Russell used for ad hoc groupings, Butcher explains in the brief liner notes), they moved beyond the ad hoc and adopted the new moniker.

Their album was recorded and released in 1989 and here includes four extra tracks from the same session. Some seventeen years later, it's surprising to go back in time and hear what these guys were up to. All of them—Malfatti and Butcher especially—have become known for their use of silence and extremely low volumes. To varying degrees, they've also become associated with the blossoming of AMM-style group playing, subsuming individual voices into an aural object. But this record is more about tension and release, something of the push/pull to be found in Derek Bailey's Company events. Some tracks, like "Sticks and Stones, hint at the future directions, but from the first track—like the group and the album, called "News from the Shed —and throughout much of the disc, it's a surprisingly clangorous affair.

The four added tracks are every bit as good as the original issue and were no doubt left off not for quality but time constraints. Of those, it's interesting to hear "Coracle from the vantage of 2006. While much of the disc sounds like a product of its time, the six minutes of breathy horns, scattered percussion and scraped strings could have been recorded yesterday.

About News from the Shed