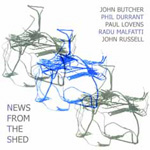 This welcome CD reissue of the original News From The Shed (released on vinyl on John Butcher's Acta label in 1989) features four previously unissued tracks. Long regarded as one of the finest examples of group free improvisation, the album's reputation has grown steadily. The quintet grew out of the existing trio of Butcher, Durrant and Russell. When Malfatti and Lovens joined them as guests for a short UK tour, it was soon clear that this was not a trio-plus-guests but a group; News From The Shed continued playing gigs until 1994.

It is particularly interesting to reassess this music in the light of developments in improvised music in the years since its first release. We can clearly hear roots of the variant strains of improv variously known as eai (electro-acoustic improvisation), lowercase, New London Silence, onkyo, Berlin reductionism, etc. Although there has been much cross-fertilisation and blurring of boundaries between these strains, their common characteristics include use of electronics, silences, very low volumes and small gestures, plus a lack of focus on individual virtuosity. As Butcher, Durrant and Malfatti have all had significant roles in these new developments, it is no surprise to hear roots here. (Indeed, Emanem proprietor Martin Davidson has stressed roots stretching back to the '70s work of John Stevens, Trevor Watts and Paul Rutherford; those variant strains came about through evolution, not revolution.)

There is plenty here that will be familiar territory to aficionados of improv; the cut and thrust of sections of "Kickshaws" or "Sticks and Stones" employ the methodology whereby any musical utterance requires a rapid response, leading to that familiar feeling of animated chatter. In contrast, tracks such as "Everything Stops For Tea" and "Reading The River" are far more sparse, with every gesture seemingly well-considered and laden with significance. Meanwhile, "Whisstrionics" lies somewhere in between, busy but quietly so.

The four unissued tracks that have been added fit seamlessly with the original ten. All four are noticeably spare. "Coracle" is so low-key it could be a product of New London Silence; the players create an atmosphere of tension that draws listeners in and keeps them in a state of heightened expectation. The result is thrilling listening.

Tellingly, Butcher says that the original tape of the album had to be remastered, as the quiet work was lost in the noise of the vinyl test pressing. Digital technology no longer makes that (such) a problem; today, it is far more likely to get lost in the general background noise of the world!