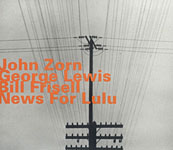 Fun, fun, brilliant, spirit-raising fun. News For Lulu, recorded in 1987 and here reissued in a new master with a bonus track, features three idiosyncratic post-modern improvisers in a homage to the late 1950s hard bop songbook—not playing the material for laughs, not subjecting it to "reconstruction," but approaching it with joy, respect, truck loads of energy and unfettered, viral abandon.

It's a perfect blast on two levels—as a celebration of some great tunes and as platform for incisive collective improvisation by alto saxophonist John Zorn, trombonist George Lewis and guitarist Bill Frisell.

Avoiding the most obvious stalwarts of the hard bop canon—"The Sidewinder," "Moanin,'" "Song for My Father" and their glorious but very familiar like—the set list instead features sixteen other, less frequently covered but still absolutely primo tunes. Four each from trumpeter Kenny Dorham and tenor saxophonist Hank Mobley, three from pianist Freddie Redd, and five from pianist Sonny Clark (whose "Blue Minor" is included in two takes). Four of the tunes are heard again at the end of the album in a live recording from the Willisau festival in summer 1987, made two days after the original Lucerne studio session.

Most of the tracks are taken at a lick and last three or four minutes—just enough time for theme statements and variations, some to-the-point collective improvisation, and a closing return to the theme—and the trio give as much attention to delivering the material with the vigor and commitment it deserves as they do to improvising on it.

The collective improvisations are no less powerful for their brevity and, like much of the best in the genre, evoke the spirit of New Orleans. Practically throughout, at least one player stays close to the theme, while the others extemporize. The Bourbon Street resonance is strengthened by Lewis' exuberant down-home trombone, whose riffs and fractured bass lines hold down the bottom of the music. At other times, a heated-up (and then some) version of saxophonist Stan Getz and trombonist Bob Brookmeyer's interplay on At the Shrine (Verve, 1954) comes to mind.

Zorn is the chief "soloist," exploring the outer edges of the material with passionate enthusiasm. That he does so on the alto rather than the tenor—the hard bop saxophone—adds a subtle twist. On the hard bop alto scale, Zorn is closer here to Jackie McLean than Cannonball Adderley (Sonny Clark's "Melody for C" being one of the notable exceptions). But above all, he's his own riotous self.

Frisell, playing the only chordal instrument, avoids playing the changes, preferring a more illusive approach. He's the most understated and nuanced player here, and he sometimes requires deliberate effort to pick out from amongst the two horns. The effort is always repaid.

A whirlwind of pleasure.