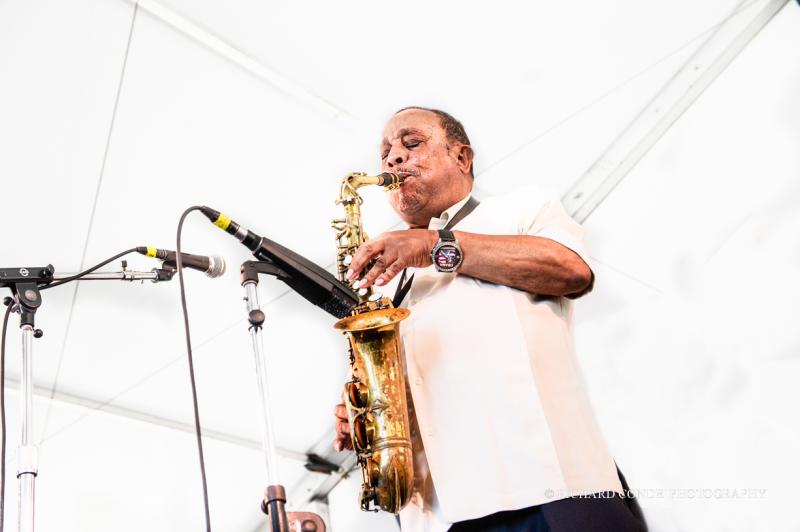 Miles Davis' earliest memory was a flickering blue flame, and a similar flame, one of passion and remembrance, was clearly evident at the 2015 installment of the Newport Jazz Festival presented by Natixis Global Asset Management.

"I saw that flame and felt that hotness of it close to my face," Davis stated in the 1990 Biography Miles. As part of the 50th anniversary of Davis' fiery 1965 Newport performance, the festival included a series of lectures that focused on different periods of the trumpeter's historic career.

Jack DeJohnette, Davis' former band mate, opened the main stage with the lengthy "Fantasy." Beneath a cloudless blue sky, a crowd of 8,400 gathered for the day's music.

At the Quad Stage, Alex Sipiagin's bright trumpet notes were heard above heavy horn riffs on "Nica's Dream," the opening number of Conrad Herwig's Latin-infused set. The music quickly began to swing, as the horns played melodic lines in unison. A gentle wind added to the tune's cool, breezy feel, on a day that would see temperature's flirt with the 90s.

Ruben Rodriguez's electric bass line locked with the conga drums, anchoring the clave. Horns wove in patterns, then explored brief bursts, atop the drum and conga rhythms. Bill O'Connell's piano playing melted, comping chords between the rhythms then creating lyrical statements that would rival the horns.

"Thanks, Newport," Herwig said as the piece ended. "We're here to honor a gentleman who I'm proud to say was my boss," a reference to Horace Silver, the musician for whom the set was dedicated.

The band performed Herwig's arrangement of "Filthy McNasty," then brought pianist Michel Camilo to the stage for a spirited version of "Songs For My Father."

Camilo's slow piano playing opened "Gods for the Yoruba," a piece that morphed and became more expansive. The bass drove the groove, while drums and conga provided the foundation from which the horns created their statements. They closed with "Nutville."

At the Harbor stage, a fast and jagged seven note riff whispered its way from Pat Martino's guitar. Carmen Intorre. joined in, riding the cymbal and establishing swing. With a whoosh, Pat Bianchi's Hammond B3 organ rushed in and the trio was off—round and mellow, the instrumental set burned. Martino opened with "Mac Tough," and then performed "Inside Out."

"I started out over 50 years ago with an influence from this gentleman," Martino told the audience before he began Wes Montgomery's "Full House." His guitar playfully augmented chords on Bobby Hebb's "Sunny." The trio closed on a searing version of Sonny Rollin's "Oled." Martino's guitar cut tones with a staccato-like rhythm that stabbed at the air. The individual notes quickly harmonized with the organ, flowing back and forth, pushing the music, and drawing reactions from the crowd.

Vocalist Cecile McLorin Salvant returned to Newport with the Aaron Diehl Trio. The way the vocalist melds with the music is a type of storytelling. She cautioned the fellas in the crowd before performing Cole Porter's lesser known "Most Gentlemen Don't Like Love." "I think maybe the ladies will appreciate it," she playfully chided before singing the piece.

"She is incredibly intuitive," pianist Aaron Diehl said of McLorin Salvant. "I think she's been singing jazz for 5 or 6 years, and she's absorbed an incredible amount of the language in that time. She is able to dial in to her influences without feeling like she has to completely replicate them. Yet, she can distill them down and create her own unique sound."

The set included the slow and emotional "Fog," that will be part of an upcoming September release, and the slick sounds of "Never will I Marry." They closed with Blanche Calloway's "Gorwlin' Dan," a bluesy ditty that brought the patrons to their feet. "Thank you all for being such a warm and welcoming audience," McLorin Salvant said, complementing the crowd.

José James applied lyrics to the slower-in-tempo, yet still familiar melody of John Coltrane's "Equinox." With Solomon Dorsey on bass, James Francies on keyboards, and Ryan Lee on drums, the tight band created layers of Gospel-infused sound. "Fine and Mellow" was a blues walk, while James sang of love loss on the R&B influenced "Come To My Door."

Thick and deep, at times the music evoked the rancid sorrows of the blues, and at other instances captured a sheer, uplifting joy. The charismatic singer closed with "Who Is He and What Is He To You?"

The Tom Harrell Quintet performed a set of lengthy, original pieces, such as "Plateau," "Sound Image," and "Delta of the Mile," that featured captivating and expansive solos.

Danny Grissett's piano opened the icy ballad "Journey to the Stars," a duo performance that included Harrell on trumpet. "Beautiful," was all one woman in the audience could say as the piece drew to a close and the audience showed its appreciation with applause.

The fast-paced "Orta" closed the set. With a Latin feel, Grissett's piano chords began the piece, and he was quickly joined by Johnathan Blake on drums and Ugonna Okegwo on bass. Wayne Escoffery's tenor saxophone and Harrell's trumpet established the main theme. Escoffery bent a note, with a hint of a brash tone. As the band augmented chords, he seamlessly moved along, probing in disparate directions in a way that moved the music.

Harrell emerged for a solo. His trumpet worked a phrasing then spat a loud, single note that encouraged Grissett's piano. Pushing the music, Harrell repeated tones in the high region of the horn. Grissett worked his piano solo to a frenzy, then danced back down with the music. Blake's drumming quickly came to the forefront, joined by bass and piano for an energetic trio segment, as the audience clapped and cheered. The horns returned for the main thematic riff, and the piece abruptly ended as each musician emphasized a single note that comprised the main phrase.

Kenny Garrett, another musician who at one time shared the bandstand with Miles Davis, closed the Harbor Stage. In a spirited set, Garrett's quintet started off with jazz sounds that turned into an outright dance party. "J Mac," an upbeat, straight ahead opening number left lots of room for Garrett's sax to speak. It was followed by "Haynes Here," both of which are found on Garrett's Seeds From the Underground (2012, Mack Avenue Records) recording.

"Happy People" had members of the audience moving. Garrett's body swayed as he played. His horn danced to the rhythms, pushing the music higher and higher, as the band locked in blissful expressions. "I know it's hot out there," Garrett said, then resumed playing in a way that encouraged the crowd to continue the party. Building from the band's driving rhythm, he repeatedly circled through the song's main melody line, climbing and falling in a swirl of sounds that kept the crowd engaged.

On "JeVais" Marcus Balyou's drumming leaned towards a heavy back beat. The musicians toyed with the music's tempo, speeding it up, slowing it down, only to bring the groove back again. "Wanne's Thang" dropped hooks and saw the playing move in and out in emotive yet danceable directions.

Garrett's set fused elements of hip hop with the jazz idiom. Staccato bass riffs, and broken piano chords teased funk rhythms, while melodic lines created danceable grooves that brought the party to a rousing close. "Well done, Newport!" Garrett praised the crowd. The flame that is jazz music burned enthusiastically at Newport, and on this day, Garrett was one of its finest torchbearers.