By GLENN ASTARITA
August 13, 2015
Sign in to view read count
Track review of "Heat of the Moment" 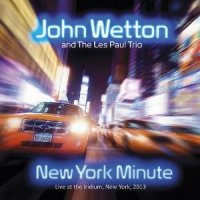 A elite member of progressive rock super-groups King Crimson, UK and the pop rock platinum selling band Asia , bassist, vocalist John Wetton engages the pop standards route, recorded live at New York City's prominent jazz venue, The Iridium. In the album notes Wetton divulges his love for midtown Manhattan, hearkening back to his days with Crimson during the summer of 1973. Here, the Les Paul Trio provides support for the aptly titled New York Minute where the artist covers pop and rock hits within an intimate club milieu. Consequently, the simultaneously released 2-CD Volume 1- -Anthology: The Studio Recordings (Primary Purpose, 2015), offers another side of Wetton's solo career that embraces a prog rock-lite schematic and may enjoy greater acceptance from his Asia fan base.

ADVERTISEMENT
It's a relatively short set clocking in at LP length and apparently part of a cancer awareness event. Otherwise, his scaled down version of Asia's mega-hit rocker Heat of the Moment, commences with pianist Rodney Holmes' somber intro amid high-end cocktail lounge type progressions, as Wetton's breathy, poignant and reflective choruses augment his full-bodied tone. The trio gradually raises the pitch and plays it light via few embellishments. Their mellow lines are simple but effective as the leader incorporates raspy inflections into this reimagined interpretation of a driving straight-four rocker. Moreover, Wetton's conspicuous grasp of each song's strengths offer additional rewards. From an artistic perspective New York Minute comes out of nowhere, but it managed to plant a broad smile on my face from start to finish.