By SAMUEL CHELL
August 4, 2007
Sign in to view read count 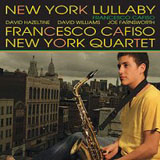 Yes, he is that good. Or was, on the occasion of this 2005 session, which features the fifteen-year-old native Sicilian saxophonist making his American recording debut accompanied by a crack New York rhythm section. Although it's common to hear rueful expressions about what a Charlie Parker or Clifford Brown might have accomplished had they lived longer, a player as precocious as Francesco Cafiso reminds us of the challenges facing an artist who appears to "be there already, yet has a lifetime before him. In June 2007, when he was seventeen, the altoist made history of sorts when he entered Birdland, the domain named after the music's most acclaimed improviser, to play the "Bird role in a re-creation of the predecessor-father figure's most popular recording, Charlie Parker with Strings. From the evidence on New York Lullaby, the young player is perhaps one of the few musicians up to such a formidable if not unenviable assignment.

The opening track, Shearing's "Lullaby of Birdland, introduces the listener to the featured performer's qualifications. His sound is full and lustrous, maintained throughout by strong breath support; his articulations are varied, ranging from quick and crisp attacks to expressive legato tonguing; his lines during the pyrotechnical passages are not merely slick but "linguistically dense, capturing the intricacy, complexity and sophistication of Parker's language. At times the youngster is undeniably overly deliberative, extending his high tones to the point that they begin to wear out their welcome. Moreover, in the upper register his commanding sound has a purity and somewhat rapid vibrato that, while winning the approval of "legit players, would not earn him points from Birdwatchers.

But it's the ballads that hold the biggest surprises, as the Italian teenager, rather than employ them as virtuoso showcases, exercises the utmost respect for the material itself. Whether he's been listening to singers like Sinatra and Johnny Hartman or absorbed the message from a player like Dexter Gordon, his phrasing, dynamics, and even articulations (with occasional airy cushions of sound) reveal a mature and sensitive interpreter thoroughly familiar with the lyrics of these standards. When I play this recording for acquaintances, the response isn't "He's incredible! but "That's beautiful music.

Give a lot of credit to David Hazeltine, a pianist capable of storming the instrument and playing fiery, gloves-off bop in the Bud Powell tradition. On this occasion, he as well as bassist David Williams and drummer Joe Farnsworth hold back, being extra careful not to offer the prodigy any unwanted, gratuitous "encouragement to display his stuff. It's as though Hazeltine is saying, "It's just another session, kid. Relax and play the song as beautifully as you know how.

That this recording, made in a New York studio with three American musicians, let alone the Cafiso story itself go largely unnoticed by the American public is scandalous. I ordered my copy from a CD import specialist and finally received it in the form of a vinyl LP, with notes in Japanese. Again, shame on the American recording industry.

Lullaby of Birdland; Polka Dots and Moonbeams; What's New; My Old Flame; Willow Weep For Me.