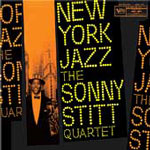 "Genius" is a misunderstood, overused term. In music there have been only a few geniuses—visionaries who have tapped into the original, vital stream that we might consider musical consciousness and changed it—Bach, Beethoven, Mozart, Armstrong, Parker, Coltrane. Sonny Stitt was not one of the geniuses, nor one of the innovators. Rather, he took the complex language of Charlie Parker and created a syntax and rhetoric that the rest of us could understand and even employ. The 2003 reissue of New York Jazz (Verve, 1956), one of an estimated 150 sessions recorded under the saxophonist's name, appears to have passed beneath the radar screen of many who follow this music, but it's simply consummate saxophone playing by a musician driven by a need for completeness and perfection.

One of the big myths among even those players who respect Stitt's playing is that his so-called "commercial" recordings—the early Roosts and Verves on which he turns in five or six flawless gems on each side of the record—can be overlooked in favor of his earlier pairings with Gillespie and Rollins, or his later virtuosic work on Muse and Cobblestone. On the contrary, it's on these miniature performances where Sonny's brilliance is especially apparent. Allowing himself no more than a couple of choruses, he still manages to construct logically complete, emotionally satisfying solos with a beginning, middle and end, time and time again. Just listen to what he does with "Alone Together"—first on tenor, then switching horns and taking the tune out with another textbook solo on alto.

This studio reissue is also especially welcome because it finds Stitt in the company of an ideal rhythm section. Jo Jones was the prototypical straight-ahead swinging drummer during his Basie tenure; Jimmy Jones was always the self-effacing accompanist for Sarah Vaughan; and Ray Brown could be whatever the occasion demanded. All three merely lay down a harmonic/rhythmic track and stay out of Sonny's way—as it should be.

Norman's Blues; I Know That You Know; If I Had You; Alone Together; Twelfth Street Rag; Down Home Blues; Sonny's Tune; Stars Fell On Alabama; Body And Soul; Between The Devil And The Deep Blue Sea.