By JAMES NADAL
September 22, 2015
Sign in to view read count 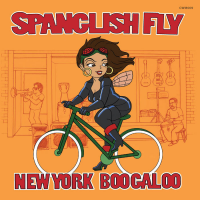 Boogaloo burst out of New York City in the mid 1960's as a crossover dance craze melding Afro-Latin rhythms with American soul. Since then, it has come to represent a galvanizing milestone for the Puerto Rican and Hispanic community in the city. It symbolizes that they had arrived and had their own music to show for it. Though it might have been a passing fad, boogaloo directly led to the global explosion of salsa, which put Latin music on the map, where it has endured.

Fast forward to 2015-enter Spanglish Fly-a cross cultural ensemble led by trumpeter Jonathan Goldman, which is revitalizing that characteristic sensation and style on New York Boogaloo. Schooled and immersed in the sights and sounds of the city, they cultivated a realistic approach to this unique music form, which continues to inspire and influence well beyond nostalgic connotations.

In homage to the expanse of ethnicities which cover the American landscape, they open with a liberal Spanish interpretation of Woody Guthrie's "This Land Is Your Land," renamed "Esta Tierra." Given a rhythmic drenching, this song speaks strongly of racial equality, inclusion, and acceptance, which remains a pertinent contemporary topic. "Bump (And Let It Slide)" develops that hybrid mambo groove that exemplifies boogaloo, while introducing the Cuban guajira (cha-cha-cha) element in "Return Of The Po-Po." This distinctive polyrhythmic Caribbean connection continues with "Martian Boogaloo," an engaging instrumental where the musicians are allowed to display their execution and knowledge of Latin jazz.

Vocalist Erica Ramos seamlessly dominates the bilingual lyrics of English and Spanish, as the nature of the songs is to shift back and forth in keeping with the genre's vocal tradition of expressive call and response. "Mira Ven Aca," a cha-cha-chá, with its piano montuno and repetitive chorus, is reminiscent of songs from the golden era of radio that resounded throughout the inner city. The soul derived, light-hearted, "42 (El Cuarenta Y Dos)" pays tribute to Yankee baseball star Mariano Rivera, recognized for his humanitarian efforts as well as athletic achievements. "Love Graffiti Me," resembles Little Eva's "The Locomotion," though composer and bandleader Goldman takes it into another orbit with a nod to modern love. Evoking shades of the definitive guajira, "El Raton," which was a huge hit for salsa star Cheo Feliciano, "Cuidate Hermana," offers words of wisdom to women living in the city, with all its perils and pitfalls.

Saving the best for last, "Brooklyn Boogaloo," takes the music back to where it came from, with an appreciative nod to the early pioneers Joe Cuba, Pete Rodriguez, and Joe Bataan. Though a generation removed from the original source, Spanglish Fly encompasses not only the complicated sound of boogaloo, they are also committed to maintaining the high quality of musicianship required for such an undertaking. They realize that for Latinos in America, music represents their ancestral heritage, and the significant cultural contribution they have made. New York Boogaloo, is a testament to that spirit.