By J HUNTER
September 8, 2010
Sign in to view read count
Jazz is like the human body. It needs fresh air, constant activity and a steady stream of nutrients to stay hale and hearty. Conversely, if all the genre does is sit in a comfy chair and try to live on what came before, it becomes sedentary, incurious and—ultimately—self destructive. Fortunately, the young keep jazz active and alive. Here are a few examples of the new kids on the block. 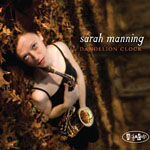 Getting past a first impression can be tough, but sometimes that's what has to happen in order to get the full measure of a musician. That's the hill that has to be climbed to get a complete sense of reed player Sarah Manning's debut, Dandelion Clock. Don't worry, though—the ascent is only a little steep.

Manning opens with Jimmy Rowles' "The Peacocks," which is a steep hill to climb in and of itself. Saxophonist Stan Getz's prototypical version was wrapped so tightly inside a mournful, romantic longing, it could have been used to score Roman Polanski's film noir homage, Chinatown. Although pianist Art Hirahara and bassist Linda May Han Oh add touches of mystery and drama to the piece, Manning simply pumps up the volume and shows how strong she can bring it. Unfortunately, this approach is the equivalent of trying to kill a butterfly with a hammer. It also discounts the vulnerability—however fleeting—in Rowles' protagonist. There's no question Manning's got the chops, but this was the wrong way to show them off.

If Manning had spent the rest of the disc going pedal-to-the-metal, this review would be a lot more painful. But once Manning starts playing her own material, her comfort zone widens noticeably. She dances with assurance on the waltzing "Marble," taking her alto sax into soprano territory and operating with great ease. "Through The Keyhole" offers a peek into a world that's both exciting and intriguing, and Manning laces the title track (inspired by a Mary K. Robinson poem) with an Eastern tone that expands the piece's exotic qualities. The lost-love song "Habersham Street" has the approach and the tone "Peacocks" could have used, but the track is so good that past missteps can be forgiven.

While Manning's partners made "Peacocks" passable, the rest of their performances make Dandelion something to stick with. Hirahara's piano offers both support and counterpoint to Manning's reedwork; his eloquent solo on "Habersham" is as enticing as the blazing fire he brings to "Phoenix Song." Oh's bass lines are thick as a brick, with the kind of command that's more readily associated with more experienced players. "Crossing, Waiting" may be a trio piece (Hirahara lays out on this track), but Oh's monumental aggression makes Manning superfluous and inspires drummer Kirk Struve to kick it up six or seven notches.

As previously noted, Sarah Manning's got the tools, but it takes a while to see her depth and potential. Patience is a rare commodity these days, but that's what's needed to get to the really good stuff on Dandelion Clock.

Visit Sarah Manning on the web. 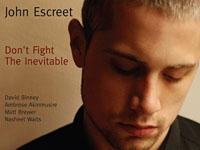 In the liner notes to his latest disc, Aliso (Criss Cross, 2010), saxman David Binney said he has been encouraging keyboardist John Escreet in his career efforts. Those efforts have scored Escreet a follow-up to his debut, Consequences (Posi-Tone, 2008), and the result is nothing like what is usually expected from someone so young in the genre.

The opening chords of "Civilization On Trial" are almost funereal, but the time signature is far too jarring for a dirge, and Nasheet Waits' drum fills insinuate that something much bigger is on the way. Binney and trumpeter Ambrose Akinmusire's melody lines could have been lifted from the theme to a pitch-dark crime drama, or maybe a sc-fi horror film. The front line flies in discordant formation as Escreet stays active underneath, and then Akinmusire lets out a blaring elephant roar that frees Binney to step out front and make the mix even more complex. Even with the piece's underlying dissonance, it stays relatively linear until Escreet's closing solo, and that's when the piece flies free and things go from weird to "Whoa!"

Don't Fight The Inevitable is chock-full of labyrinthine pieces that defy any attempts at pigeon-holing. The title track seems to carry on the closing vibe of "Civilization," but then things stop dead and Escreet is by himself and skating off in a whole new direction. "Magic Chemical (For The Future)" could arguably be seen as meditative, though whatever Escreet was contemplating must have been extremely dark. "Avaricious World" is, for all intents and purposes, the sequel to "Civilization"—and, as with all sequels, the body count here is much bigger. If the piece's insane electronics are any indication, the justice is being meted out by interstellar travelers who did not like what they saw happening here.

Binney's own virtuosity is well documented, both on his own releases and on stunning guest shots on discs like Joel Harrison's neo-fusion firebrand Urban Myths (HighNote, 2009). But Binney walks through a whole new door on Inevitable, showing a ravenous taste for musical anarchy that was only hinted at previously. His lines on "Civilization" could be the screaming of a defendant pleading for his life. In contrast, Akinmusire's solos are relatively smooth, although there's a marvelously ragged edge to his title-track solo, and his frantic contributions to "Trouble And Activity" heighten the piece's excitement.

During Escreet's deconstruction of Muhal Richard Abrams' "Charlie In The Parker," Abrams says (in a recording), "In another 25, maybe 50 years, some youngster will come along and take the style and really do something with it." Abrams called it, because John Escreet is doing it. All naysayers should refer back to this disc's title: Don't Fight The Inevitable.

Visit John Escreet on the web. 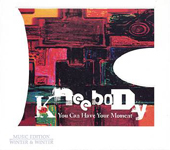 You Can Have Your Moment

Of the many complaints jazz purists love to repeat, one of the biggest is: "New artists just don't respect jazz history!" Unfortunately (for the purists), trumpeter Miles Davis' Bitches Brew (Columbia, 1969) and seminal fusion groups like Weather Report and keyboard player Herbie Hancock's Headhunters are also part of jazz history, and have had the same effect on 21st century musicians that the works of trumpeter Louis Armstrong and composer/bandleader Duke Ellington had on past generations of jazzers. In that light, Kneebody's Winter & Winter debut, You Can Have Your Moment, not only respects jazz history, it might also add to it.

The opening track may be named after a cuddly children's toy, but "Teddy Ruxpin" is anything but a rag doll. Saxman Ben Wendel and trumpeter/composer Shane Endsley set the attention-grabbing initial figure while drummer Nate Wood drops bombs here and there. Add keyboardist Adam Benjamin's sizzling chording, and the first of many hot grooves is established. Benjamin and bassist Kaveh Rastegar lay a rocking foundation as Wendel goes out on a limb and stays there, tearing up the air with his uncompromising wail. Endsley eventually claims the spotlight with a sound that offers definite contrast but similar power. It's enough to let the piece catch its breath without losing momentum, and when Wendel comes back for the head, "Teddy" is soaring like an eagle.

Although not every track on Moment moves at warp speed, the same paradigm-shaking dynamic remains constant. The follow-up track, "Held," serves up a snarling electric blues that makes Wendel's sax sound even more lonesome. The colors in Wendel's "Call" are vivid and bright, and become progressively blinding as Wood ratchets his establishing figure higher and higher. "Nerd Mountain" is the astonishing sound of mainframe computers getting funky after the IT wonks have fallen asleep under their desks, and the protagonist of "Desperation Station" shambles through the night searching for redemption, release, or (at least) a little help. Wood and Rastegar are absolute monsters, no more so than on the riveting trio piece "The Blind." This is music for 2010, complete with Avatar-quality special effects. Armstrong and Ellington are, literally, ancient history.

Moment travels through the same creative airspace as Chris Potter Underground's Ultrahang (ArtistShare, 2009). The only difference is the number of creative voices Kneebody has to offer. Endsley and Benjamin wrote eight of the 12 tracks, but the disc is thick with collaboration from start to finish. The astounded laughter at the end of the closer, "High Noon," is the sound of young men who can't believe what they just did. You Can Have Your Moment is not hard to believe, but it may be impossible to duplicate, even if history does repeat itself.

Visit Kneebody on the web.

Tracks: The Peacocks; Marble; Habersham Street; I Tell Time By The Dandelion Clock; Crossing, Waiting; The Owls (Are On The March); Through The Keyhole; Phoenix Song; Windmills Of Your Mind.

Tracks: Civilization On Trial; Don't Fight The Inevitable; Soundscape; Magic Chemical (For The Future); Charlie In The Parker; Trouble And Activity; Gone But Not Forgotten; Avaricious World.

You Can Have Your Moment

Tracks: Teddy Ruxpin; Held; The Entrepreneur; No Thank You, Mr. West; You Have One Unheard Message; The Blind; You Can Have Your Moment; Desperation Station; Nerd Mountain; Call; Unforseen Circumstances; High Noon.