By MARK CORROTO
January 3, 2015
Sign in to view read count 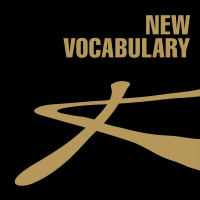 Saxophonist Ornette Coleman has such an original voice that his horn would be recognizable if he sat in with a Japanese noise band. Like late-Miles Davis appearances, the pleasure is hearing his distinctive blues-drenched sound, the plaintive cry of his alto saxophone. He last surfaced, on a recording that is, with Sonny Rollins' Road Shows, Vol. 2 (Doxy, 2011) making a guest appearance in 2010 at the Beacon theatre to accompany Rollins on "Sonnymoon For Two."

New Vocabulary is a project from the duo of trumpeter Jordan McLean (Antibalas, Iron And Wine) and drummer Amir Ziv (Cyro Baptista, Droid, and Kotkot). They have fashioned a musical environment for Coleman's gestures and voice. One not unlike Miles Davis' Aura (Columbia, 1989) or Tutu (Warner, 1986), except where the Miles' projects felt sterile, New Vocabulary exudes fecundity, that is with a small 'f.'

Each track is a sort of vignette stripped to bare-bones rhythm and electronics as a petri dish for Coleman to vocalize. McLean's echoing muted trumpet and electronics opens "Baby Food" with Coleman dancing his own nursery rhymes over top. "Alphabet" swamps wavy distorted trumpet and Ziv's disjointed marching beat against the familiar Coleman signals. The pair employ the keyboards of Adam Holzman on three tracks to center the music, or at least locate it within a chamber context. Each composition from the scrubby "Wife Life" to the ballooning "H2O" has a buoyancy to it, a statically minimalism of 'the new.' Not the shocking newness of Ornette's sound fifty years ago, the one that could start a fistfight. Because, well nothing is shocking any longer. But Ornette's sound. That sound remains vital and relevant to adventurous music listeners.

Baby Food; Sound Chemistry; Alphabet; Bleeding; If It Takes A Hatchet; Value And Knowledge; Population; Wife Life; The Idea Has No Destiny; H2O; What’s Hotter Than The Sun; Gold Is God’s Sex.