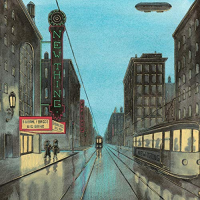 It's always exciting and pleasurable to welcome a new member into the jazz world's ever-shrinking big-band fraternity—especially one as sharp and energetic as this. The tasteful and impressive Ekdahl / Bagge Big Band—from Stockholm, Sweden, no less—takes its name from those of its co-leaders, drummer Per Ekdahl and pianist Carl Bagge who composed and / or arranged seven of the nine numbers on the band's dazzling debut album, New Thing.

Putting its best foot forward from the outset, the ensemble "Wilkommen"s its listeners with Ekdahl's clever arrangement of the Kander and Ebb showstopper from the Broadway smash Cabaret, interlacing snug section work with animated solos by Bagge and trumpeter Jonne Bentlov. Soprano Johan Christoffersson, trumpeter Nils Janson and Bagge are in top form on the pianist's vigorous "Ask Me," as are Bagge, alto Per Johansson and trombonist Peter Fredriksson on Ekdahl's rocking, Gospel-framed "Let's Hook Up!" The tempo slows and the mood softens on the second of Ekdahl's four exemplary originals, "Waltz for Walt," from which tenor saxophonist Linus Lindblom wrests every measure of warmth and emotion, as does the band as a unit.

Ekdahl's "Three Colours," which follows, is another well-drawn, meditative theme with lustrous solos by Bentlov and Johansson, prefacing baritone saxophonist Fredrik Lindborg's fast-moving "Oriental Express," which rushes earnestly forward behind incisive solos by the composer and trombonist Kristian Persson and forceful timekeeping by Ekdahl. Bagge composed the album's title song, a charming pastorale on which he and Lindblom share solo honors, Ekdahl the ardent ballad "Before You Leave," which showcases two more perceptive soloists, tenor Robert Nordmark and trumpeter Emil Strandberg. The album closes on yet another high note with bassist Martin Sjostedt's darting "Black Swan," which gives every section of the band a spirited workout as a prelude to bright and enterprising solos by Nordmark, Ekdahl and trumpeter Karl Orlandersson.

For the past four years, the Ekdahl / Bagge Band has been performing monthly at the Scala Theatre in Stockholm. Fortunate are those who live in the area and have the means to see and hear this superb ensemble in person. As for the rest of us, we now at least have aural evidence of its power and proficiency. A New Thing, it's true, but one that is nonetheless welcome and appreciated.