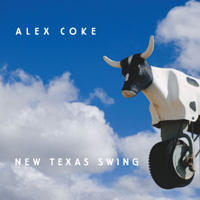 When one keeps glancing at the “elapsed time” while listening to the opening track on an album to see how much longer it has to run, that’s not a good sign. Alex Coke’s New Texas Swing, which was actually recorded in the Netherlands, is full of sound and fury, but its significance is lessened by unrelenting waves of clamorous intercourse.

Not to discount anyone's sincerity — these are four accomplished musicians who undoubtedly believe in what they are doing — but I find it hard to relate to music that uses a club instead of a scepter to hammer home its point, however valid it may be. Drummer John Betsch is the worst offender, although in his defense that’s probably the way Coke wanted him to play, loud and heavy- handed. Coke is no slouch at the raucus game himself, often going over the top with assorted squeaks, squawls, honks, growls and undetermined sounds borrowed from the lexicon of Pharoah Sanders, David Murray, Sam Rivers, Archie Shepp, Peter Brötzmann and any number of others. When he’s not using those ploys, which isn’t nearly often enough, Coke seems a capable improviser from the Coltrane / Brecker / Lovano school. He plays tenor most of the way, flute on “The 13th Floor.”

Tina Marsh sings and/or scats on every track, for the most part wordlessly in the manner of Norma Winstone or Judi Silvano. As far as I can tell, there only bona fide lyrics appear on Charlie Haden’s “Human Being” and Huddie Ledbetter’s tongue-in-cheek “Out on the Western Plains.”

The response to Marsh’s vocal gymnastics lies in the ear of the beholder and depends on one’s musical comprehension and taste, as indeed does his or her reaction to the enterprise as a whole. As the saying goes, one man’s trash is another man’s treasure. The New Texas Swing I heard was more often chaotic than swinging, but others may not perceive it that way at all.

Visit CreOp and Alex Coke on the web.
Email CreOp or Alex Coke .

Round Trip; Go Down Ol