By GLENN ASTARITA
September 13, 2013
Sign in to view read count 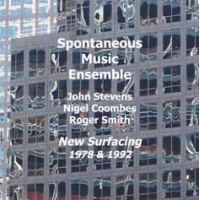 This album offers a snapshot of the post-1976 version of the legendary free-jazz improvisational unit, Spontaneous Music Ensemble's (SME) reign as a quartet. Two thirds of the material is derived from performances by the guitar-violin-percussion rendition, captured at a 1978 concert in Newcastle, England. It was previously released on Trio & Triangle (Emanem, 1978) but the recording quality was less than desirable, emanating as it did from a cassette tape. Producer Martin Davidson cleaned it up, yet eventually tracked down the master copy on reel-to-reel, marking a significant audio improvement evidenced on this release. The third piece, "Complete Surfaces," was culled from a London concert in 1992 and partially issued in 1994 by the Konnex record label.

The Newcastle concert, containing tracks "Newcastle 78A" and "Newcastle 78B," was performed in a space that spawned a bit of reverberation, offering a somewhat unintended depth and distance, but the recording quality is adequate. Nevertheless, the trio's astonishing intuitiveness comes to light. Nigel Coombes often bridges the proceedings between his cohorts as John Stevens is a tireless multitasking machine, performing on various percussion implements amid a few vocal antics.

On "Complete Surfaces"—which is the output of a 1992 studio session—the trio infuses more of the same, running the gamut of what is humanly possible for three men to accomplish within a half-hour. Moreover, the artists' collaborative sense of the dynamic could be evaluated with an oscilloscope, or so it may seem. As anticipated, these archival recordings once again provide credence to SME's imaginative compass that, among other positives, was an educational institution in itself.