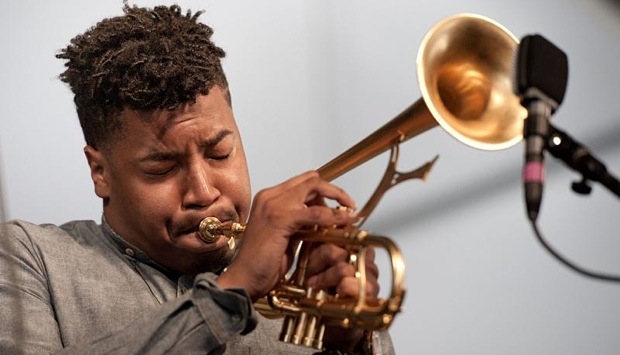 Day 1: April 29, 2011
The New Orleans Jazz & Heritage Festival turned 42 this year. I've been to 25, and the thrill of anticipation entering the fairgrounds and crossing to the WWOZ Jazz Tent never grows old.

First , gratitude for the weather—bright and sunny, with occasional refreshing breezes. And for the much-improved sound in the tent, whether due to new equipment or to a new stage crew. What had been often-muddy sound in the past is now crystal clear.

The best music was saved for last this day. The Golden Striker Trio, comprised of bassist Ron Carter, pianist Mulgrew Miller and guitarist Russell Malone, made elegant chamber jazz of a caliber not often heard since the heyday of the Oscar Peterson trios of more than a half-century ago. Over Carter's booming foundation, the others built dazzling melodic and harmonic creations, bouncing ideas off one another like kids with a beach ball.

There were moments of great delicacy, as when Miller caressed "My Funny Valentine," or when a gentle waltz evolved into the evocative "Nightingale Sang in Berkeley Square," under Malone's tender ministrations. But, mostly, this set consisted of down-home, bluesy swing, as bass and guitar laid down a solid 4/4 for Miller's increasingly urgent solos. On the closing "Soft Winds," Carter and Malone kept goosing the pace, challenging Miller, who kept right up. The audience stood and roared. The hour was up, but all concerned wanted more, and got it: a soulful encore on "Bags' Groove." 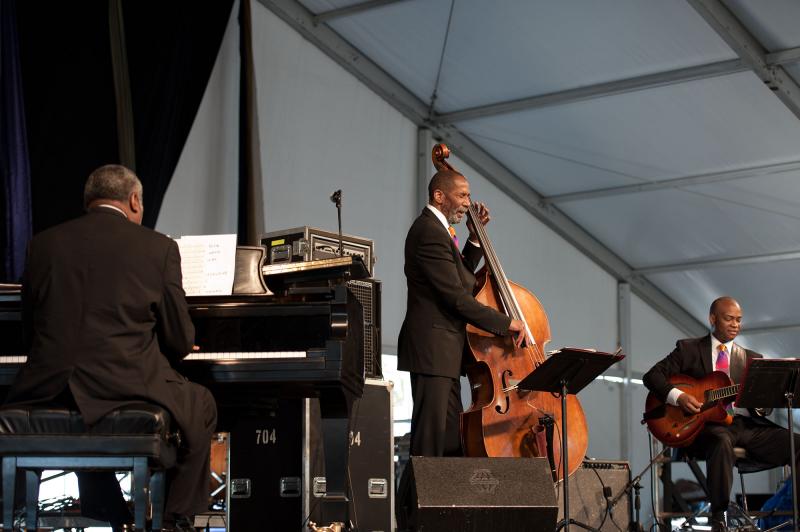 Earlier in the day, Anat Cohen soared and swooped joyfully, leading her impressive quartet. After her jittery restructuring of "Jitterbug Waltz," the clarinetist/soprano saxophonist turned a Cuban tango into a musical globetrot, with stops in Spain and her native Israel.

Highlights were Abdullah Ibrahim's hymn-like ballad, "The Wedding," and Cohen's "J Blues," a salute to her pianist, Jason Lindner, that featured a mesmerizing duet between bassist Orlando Fleming and drummer Daniel Friedman.

The day began with a sextet from the Thelonious Monk Jazz Institute, which draws aspiring players from around the world to New Orleans. The young men displayed both their playing and composing talents on several intriguing originals, particularly "Sir Charles," (for Charles Barkley), a bluesy number that bounced over some bumptious drumming by composer Nicholas Falk. "Desert Song," by bassist Hogyu Hwang, painted a serene landscape with constantly shifting keys, featuring passages of finely wrought three-part harmony for the horn section. 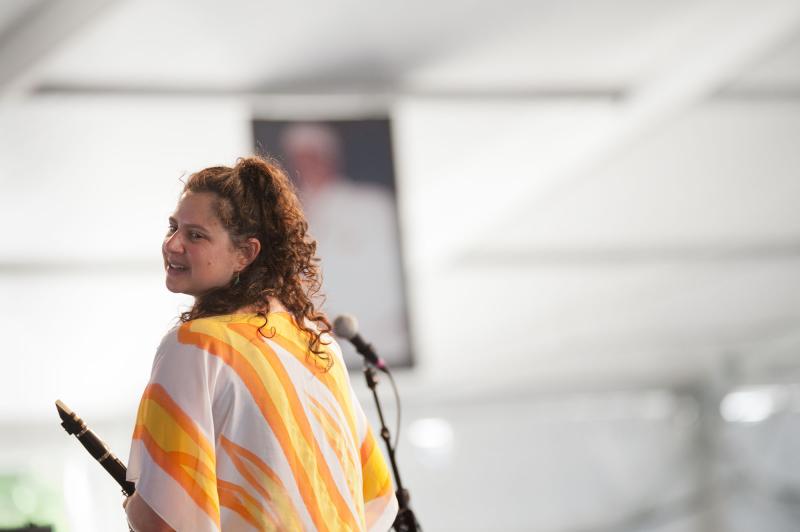 Germaine Bazzle, the city's "first lady of song," was in fine spirits and fine voice, singing, scatting and showing off other vocal tricks during 10 of her favorite old tunes. Nothing new, but it was great to witness again her joy in making music.

Mashup is a quintessential organ trio led by New Orleans drummer Terence Higgins, with Grant Green Jr. on guitar and Ike Stubblefield supplying spine-straightening electric jolts on keyboards. Their specialty is riffing on simple blues licks—a satisfying formula, especially when Higgins put down a second-line beat that turned the crowd into a sea of bobbleheads.

John Boutte is a wonderful singer, but he's not jazz. And yet the New Orleans Jazz & Heritage Festival slotted him into the WWOZ Jazz Tent some 10 years ago, and he was an instant hit. Thank goodness, he's been back every year since.

His blend of pop, folk, gospel and R&B is best categorized as "New Orleans music," much of it self-composed or in collaboration with friends. His "Down in the Treme," the theme song for the HBO TV series Treme, is a prime example. 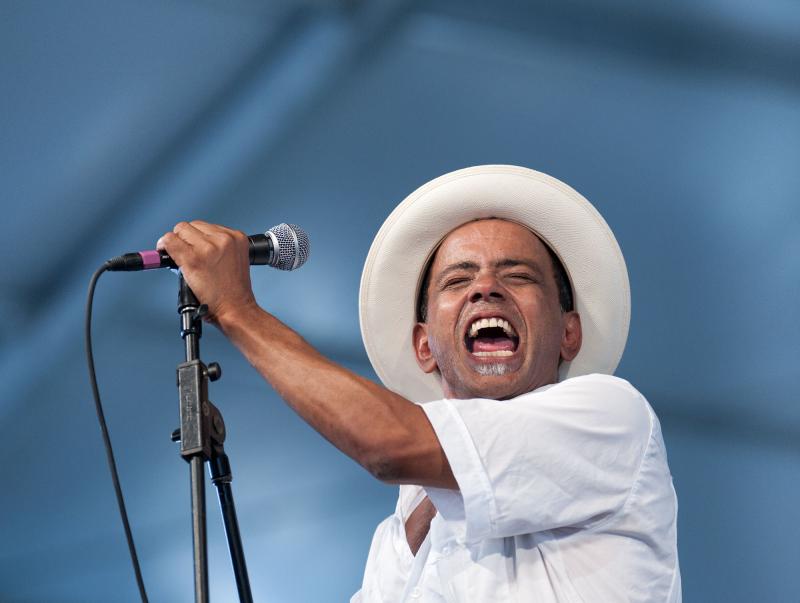 Boutte was in great voice this year, putting his angelic pipes to work on favorites like "Sisters" and "City of New Orleans," remembering the late James Booker on the heart tugging love ballad "Let Them Talk," and lullabying the audience into reverent quiet on Leonard Cohen's "Hallelujah," a hymn about summing up a life on Judgment Day. He also sent a sympathy card to Japan on "Meaning in the Message," a prayer for recovery from his once-devastated city to a bereft country.

But mostly, Boutte was upbeat, slapping his tambourine, moving to the music's rhythm, indeed "jumpin' and havin' fun," as his hit song's lyrics advised.

Pianist Ahmad Jamal was the closing act, getting standing ovations before, During, and after his 90-minute set from an overflow crowd of more than 2,000 adoring fans. 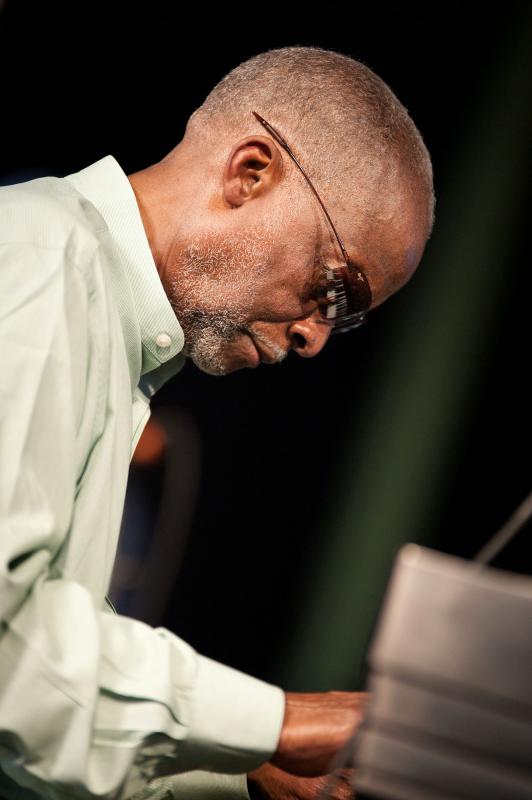 I'm not one of them. Jamal's playing is too peripatetic for my taste. He rarely plays more than a few bars of a melody before jumping off into innumerable displays of his immense technique—jagged stabs at the keyboard, skittering single-note runs, cascades of chords, full-arm sweeps down the 88s. It's all dazzling, but is it sufficiently musical?

I did delight, however, in the drumming of hometown boy Herlin Riley, whose ear-to-ear grin reflected the joy in his playing. Clearly, he and the quartet's percussionist and bassist had great rapport with Jamal.

Earlier, veteran tenor saxophonist Charlie Gabriel was welcomed back after a long absence in Detroit, and played "Body and Soul" with the same passion Coleman Hawkins did in his landmark recording.

Trumpeter/singer Jeremy Davenport is a local favorite, offering American Songbook standards in a Harry Connick, Jr.-like voice, and occasionally exercising his jazz chops, as he did in a rapid-paced duet with alto player Aaron Fletcher on a Charlie Parker bopper.

At a news conference early in the day, with Mayor Mitch Landrieu and Jazz Fest founder George Wein, the fest's CEO, Quint Davis, announced that Shell Oil Co. has signed on for another three years as lead sponsor.

Terence Blanchard is a NOJHF favorite, having played here for some three Decades. Once again, he demonstrated his fertile imagination as a composer and distinctive sound on trumpet, with passages ranging from breezy to blistering. 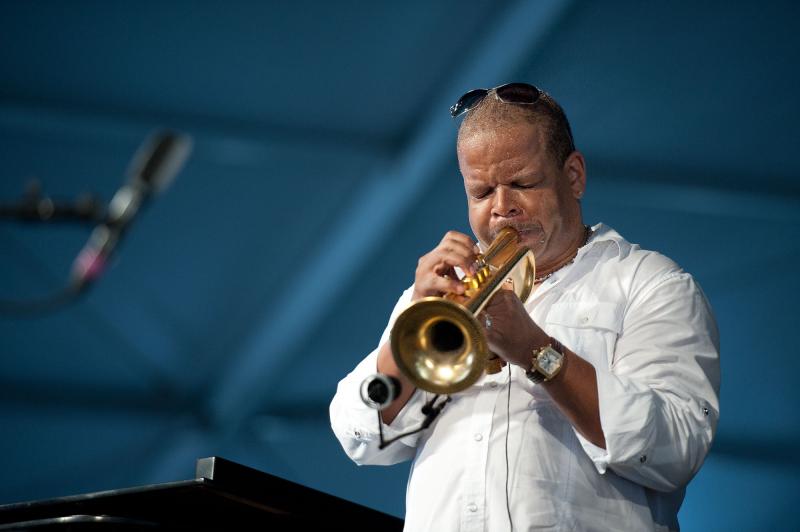 The set's centerpiece, "Choices," began with the recorded voice of Cornel West, philosophizing on the meanings of life and jazz, and grew from its serene theme to roaring intensity, before receding again to tranquility. Both Blanchard and saxophonist Brice Winston constructed solos to match—calm-to-storm-to-calm, while the trumpeter employed tone-splitting technology to create the illusion of a brass choir on another composition, to stunning effect.

Blanchard introduced his pianist daughter, Sidney Bechet Blanchard (age 14), for a tender duet on the theme from his Grammy-winning suite, A Tale of God's Will. (Blue Note, 2008).

That was the only set I caught in the WWOZ Jazz Tent all day, as I wandered the vast fairgrounds along with some 100,000 other festival visitors to sample the many other sounds of Louisiana music.

Reggie Hall and the Twilighters covered rhythm-and-blues and rock hits of yore, though not the New Orleans ditties I craved. The keyboardist and his array of horn men and guitarists played superbly, but mostly as a backdrop for singer Lady B to belt out the anthems of Aretha Franklin, Tina Turner, Etta James and others.

An hour of duets by pianist Tom McDermott and clarinetist Evan Christopher proved a welcome respite in the picturesque Lagniappe venue, nestled behind the old racetrack's grandstand. Their originals—waltzes, tangos, choros, and a rumba-laced boogie in tribute to the classic New Orleans piano sound—were flawlessly executed gems.

A traditional jazz tribute to gospel great Mahalia Jackson—a New Orleans native whose 100th birthday is this year—drew me to Economy Hall to cap the day.

Clarinetist/jazz historian Dr. Michael White gathered four singers with remarkable voices for the tribute, and Barbara Shorts, Mathilde Jones, Danielle E. Wilson and Cynthia Girtley (who also was the pianist), were up to the task, earning ovations from a crowd that included some of Jackson's family members.