By ERNEST BARTELDES
December 11, 2006
Sign in to view read count 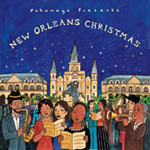 With so much holiday music appearing on the shelves at this time of year, it's refreshing when an album can actually surprise you instead of giving up the same old usual boring caroling. What you get instead from the one is an earnest, honest glimpse of what Christmas in New Orleans might be like.

The disc opens with a right-down-to-business ragtime version of "Santa Claus is Coming To Town, which features Big Al Carson with Lars Edegran (of Pretty Baby's soundtrack). The song becomes the perfect introduction to kick off the rest of the cleverly selected tracks. This is followed by the idyllic view of Yuletide down on Bourbon Street through the groove of James Andrews' "Christmas in New Orleans.

One track that immediately caught my attention is Ingrid Lucia's "'Zat You, Santa Claus? , which is almost a more playful take on "Santa Baby, arguably the sexiest Christmas song ever (sadly, there is no recording of that one here). Lucia's voice bears a close resemblance to that of Billie Holiday. I noticed, however, that she is not trying to emulate Lady Day, but she does have that same honk and style (enough to send chills down your spine). Another great moment is "Silver Bells, which features the Heritage Jazz Band with Gregg Stafford.

No New Orleans collection would be complete without the presence of the Marsalis family—and here we have the clan's patriarch, Ellis, delivering an upbeat version of "God Rest Ye Merry Gentlemen, exploring the song's melody and cleverly improvising on it. One might expect crassness from yet another recording of "White Christmas. Instead, we find here a fresh take on the classic tune delivered by John Boutté, who brings a cheerful, party-like feel to it.

New Orleans Christmas sounds good even after repeated hearings, and this musically rich, cliché-free album can even be enjoyed outside the season.