By JERRY D'SOUZA
December 6, 2007
Sign in to view read count 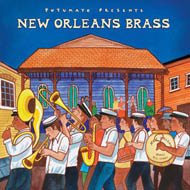 Marching bands are an integral part of New Orleans. Where would a parade be without one, or for that matter a funeral? No matter what the role is, they bring in a special magic and joy.

Music evolves as it imbibes and imbues other genres. Marching bands were no exception, as they pulled in different sounds including rhythm and blues and funk as well as gospel, which served them well. This sampler dovetails on the heritage and the influences and comes up trumps.

The CD starts off appropriately enough with "Bourbon Street Parade, featuring brothers James and Troy Andrews. The song is a blistering march, with James singing in the style of Louis Armstrong, even imitating the gravel voice. Troy, who plays the trombone, generates a lot of heat but the whole band comes together to make the listener salivate for more. Troy returns on "Dreamboat with trumpeter Lionel Ferbos. The two complement each other playing with a vivid imagination and lithe verve. Listening to them is pure delight.

Kermit Ruffins (trumpet and vocals) takes a high-spirited romp on "Treme Second Line (Blow Da Whistle). The basic theme is a march, but Ruffins and his band show an inventive dexterity as they pull out all the stops with pithy inventions and a well-honed swing.

Glen Andrews and the Lazy Six take the gospel song "Over in the Gloryland and bake it in the sunshine of a march beat. This has everything going for it: a snare drum that drives forward, a bass that reinvents the word supple, snaking keyboards and Andrews who plays the trombone both smooth and greasy and sings all sweaty and hot. This trip is certainly an exultant one.

The enhanced CD has a video for "Do They Play Jazz in Heaven, by singer Ingrid Lucia with Irvin Mayfield and The New Orleans Jazz Orchestra. The video offers a travelogue of New Orleans, in which the band serves up another tasty musical tidbit and a jolly good finale.