By NENAD GEORGIEVSKI
April 16, 2016
Sign in to view read count 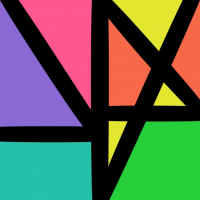 For a band of magnitude and history like New Order's the lines between "indie," "dance" and "mainstream" always get blurred. Somehow the band has always transcended these labels ever since it rose from the rubble of the much-beloved band Joy Division. At the start of the '80s the band grew more inspired and fascinated by popular dance club culture of the moment and successfully blended those experiences into its own idiom. New Order was the first among the big pop/rock bands to dabble in such genre-bending "tomfoolery." But the band didn't just dabble or borrow from the dance scenes but it fully immersed itself in the underground dance club scene over the course of its existence in order to come up with enjoyable and groundbreaking music. As a result, it appeared that the band is looking forward, intent on innovating its own sound. During its 35 year existence the New Order has had its ups and downs, periods of inactivity and internal turmoils, when in 2007, one of the founding members, bassist Peter Hook, unilaterally announced that the New Order has split.

Their previous album Waiting for the Siren's Call (London, 2005) was far from the record it promised to be as it only delivered the goods moderately. Despite some brilliant moments, it was obviously a creative nadir. While it had that familiar template, it sounded tired and lacked the spontaneity, the freshness, the creativity and the playfulness that was characteristic for their music. The band re-grouped without Hook and toured the world. The internal conflict even hindered the prospects of the follow-up record Lost Sirens (Rhino, 2013) which wasn't a record comprised of outtakes but a proper album recorded during the Waiting sessions and was planned for a release soon after. It's a lot to endure for any band.

But day always follows night and the notion of a comeback is nothing new to this band. The album Music Complete (Mute, 2015) was truly a return to form. In a fantastic way it showcased one of New Order's greatest attributes i.e. the band's ability to take a contemporary form of music and to add its own unique perspective through their songs. The veteran Mancunian outfit returned with a vibrant affair that was heavy on glacial electronics and pulsating dance rhythms. For most part on this record they have fully embraced dance music. Its cinematic qualities, the baggy beats, the chunky guitars and the keyboards washes have made it more close to Republic (Centredate, 1993) than any other releases in its oeuvre. The real strength of this album comes from excellent songs that this album has plenty of. From the playfully uplifting "Restless" to the closing song, a collaboration with The Killers' Brendan Flowers "Superheated," New Order sounds like a band that is high on being in a studio for the first time, while the songs and their execution sound too focused and mature for all this to sound like a beginner's effort.

A year after Music Complete comes Complete Music and the band steps up the gear more and unleashes another powerhouse of keyboards and dance-fueled beats. This release is actually a collection of extended mixes that drastically alters the original songs. Most of these extended mixes have appeared on the limited edition vinyl box set of Music Complete. Usually alterations highlight the talents of remixers rather than the author's blueprint. In this case, this material highlights both New Order's original vision and its expansion. This should not come as a surprise as New Order, since its earliest days, has embraced remixes and remodeling of their songs to be even more appropriate for the dance floor and the club culture. They have even put out a best of remixes titled asThe Rest of New Orderof some of their most popular hits and one of their most popular box sets Retro (London, 2002) features a separate selection with remixes titled "Club." Taken on a track-by-track basis, Complete Music is all pretty engaging. The extended mixes are well-chosen and enlightening and are truly an essential listening. On these elongated songs, the band creates an alternative world to Music Complete by emphasizing the beats and loops and extra electronic effects and embellishments. There is a flawless sense of cohesion and New Order's music appears to remix and alter very easily.

It is amazing how New Order has remained something of an anomaly throughout its entire existence. Their inspiration takes them to strange but beautiful places. At its best, Complete Music works great both as an experiment and as a listening puzzle to work through. If you know Music Complete well you will hear new things in it after giving this record a couple of spins. Obviously both Music Complete and Complete Music showcase that New Order's creativity seems to have entered a fertile new phase.