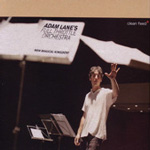 It is standard rhetorical practice to speak of new ground being broken, of barriers being dissolved and of all melding with clarity into a singular vision, but there's increasingly little room for such claims to be made, even less for them to be taken seriously. This newest offering from the always interesting bassist and composer Adam Lane does no such thing. All of his influences are in plain view throughout as just that, apparent as the proverbial heart on sleeve. The most interesting track, the Webern-esque "Objects, reeks of second Viennese school filtered through Mingus or Dixon or Thornhill or Raeburn.

That's okay, and the disc certainly does not suffer because it evokes the past and not some kind of radical future. The playing is actually bolstered byreference, the fact that each member of this group is so well-versed in the vocabularies of previous generations giving the project more credibility. Guitarist John Finkbeiner, for example, channels Where Fortune Smiles-era McLaughlin and '80s Sonny Sharrock with facility and conviction. Lane's bass playing has the drive and soul of Mingus augmented by a healthy dose of Art Davis' timbral concerns. The compositions are tight, except where unison passages are purposefully and deliciously ragged and sometimes even fun.

If a certain New Thing squall is pervasive, there is enough interest engendered by group interplay to keep the proceedings fresh throughout this entertaining disc. The future will creep up on these top-notch players, quietly but with certainty that needs no rhetorical fanfare. Let's watch.

In the center of the Earth, Looking for Mike; Nutria One; without Being; Avenue X; Sienna; Objects; The Gennius of el Segundo; Serenity; Schnube.