By JACK BOWERS
September 23, 2018
Sign in to view read count 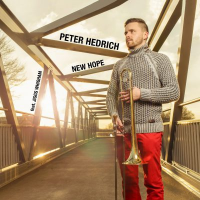 In a blindfold test, one would be hard-pressed to name the leader on the album New Hope. According to the jacket, young German-born trombonist Peter Hedrich leads the way but while he does solo on eight of eleven numbers he's basically one of the group, laying claim to no more blowing space than his colleagues, especially saxophonist Tim Sammel and pianist Felix Hauptmann. The album is a tribute to the American-born trombonist Jiggs Whigham who has spent many years in Germany and released his own recording, Hope, with a number of European stars, in 1976.

Whigham does play a central role in the enterprise as composer of five numbers and soloist on Hedrich's trio of compositions: with Sammel on "Utopia," alongside Hedrich (and others) on "Lawyer's Blues" and "Hope and Tears." Hedrich's feature, "Going Home" (on which he does not improvise) is listed as "trad." but is actually the largo from Antonin Dvorak's Symphony No. 9, From the New World. Elsewhere, the mood is similarly subdued and introspective, with three exceptions: "Lawyer's Blues," Wilton Gaynair's "The Healer" and Whigham's "Absolutely Knot." Needless to say, they rank as the album's high points while giving the rhythm section (Hauptmann, bassist Nicolai Amrehn, drummer Kevin Nasshan) some rhythmic red meat into which to sink their collective teeth.

Jazz enthusiasts may skip Track 1, as there is no jazz to speak of on Whigham's ethereal "Bodge" (vocal effects courtesy of Veronika Anna Morscher) and go directly to Track 2, "The Healer," a fast-moving swinger with bright solos by Hedrich, tenor Sammel and Hauptmann. Whigham also wrote "Hope," "Owa Tagu Siam" and "Chant," each of which pursues a rather even-tempered path toward its destination, redeemed in part by impressive group interaction and capable ad libs by Hedrich, Sammel, Hauptmann and Amrehn. There is a "bonus" track, the standard "I'll Be Seeing You," whose charming melody is neatly hidden until Morscher's vocal, which gives rise to the sentiment that she should have quit while ahead on "Bodge." Although there isn't a whole lot on New Hope that would arouse many listeners' enthusiasm or enliven their emotions, it merits no less than three stars for solid musicianship.