By BRUCE LINDSAY
November 18, 2012
Sign in to view read count 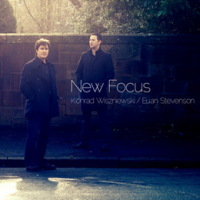 Saxophonist Konrad Wiszniewski and pianist Euan Stevenson are at the forefront of an exciting new generation of musicians based in Scotland. Wiszniewski is probably best known for his work in Brass Jaw—a full-on quartet featuring three saxophones and a trumpet—and Stevenson for his classical playing, as well as his arrangements for ensembles such as the BBC Big Band and the Edinburgh Jazz Festival Orchestra. Together, they make a strong new compositional force.

New Focus is part of what seems to be a growing, and very welcome, trend among young British jazzers: the drawing together of jazz and classical musicians into a single, unified, ensemble. This approach is apparently not the inspiration for the album's title—it refers to a performance of music from saxophonist Stan Getz' Focus (Verve, 1961)—but it's certainly a key feature of the music. It's not a totally new approach, of course, but Wiszniewski and Stevenson join other young British composers such as Laura Jurd, Matthew Halsall and Trish Clowes in reinvigorating the idea and adding a contemporary spin.

Wiszniewski and Stevenson share composer credits fairly equitably: four tunes to the saxophonist, five to the pianist; each draws inspiration from diverse sources. The short "Intro" isn't credited on the album cover: consisting of a bass solo with an improvised feel, American bassist Michael Janisch might take the credit but, as it flows neatly into Stevenson's "El Paraiso," perhaps the credit should go to the pianist.

As if to emphasize the egalitarian nature of the relationship, it's the Glasgow String Quartet that makes the first impression on New Focus, with its beautiful introduction to Wiszniewski's "Nicola's Piece." The tune has a genuinely orchestral quality that belies the fact that only nine musicians are involved, with Alina Bzhezhinska's harp adding a brightness and sparkle to the overall sound. Stevenson's "El Paraiso" brings memories of saxophonist Charlie Parker's recordings with a string orchestra. Wiszniewski's "For Ray" mixes romantic melodies from Wiszniewski and Stevenson with some forceful drumming from Alyn Cosker, while the saxophonist's "Dziadzio" offers an intriguing mix of soft-toned, Getzian tenor sax and sweeping strings.

Stevenson's "Interlude" is a solo performance from Bzhezhinska, a gently lyrical tune with a strong folk influence which leads into the pianist's "Music For A Northern Mining Town," the album's tour de force. There's a strongly elegiac feel to this tune and also, perhaps, a debt to George Gershwin to be heard in the string arrangement. There's a great ensemble performance of the beautiful but mournful theme, and strong solos from Stevenson and from Wiszniewski on soprano sax—a fond valediction for a type of community that is rapidly disappearing.

New Focus is a great advertisement for the Scottish jazz scene. Wiszniewski and Stevenson are talented composers who, together with their fellow players, meld inspirations from classic jazz and Scotland's own musical heritage to create exciting and innovative music.